Last night I went to w00tstock 2.0 at the Moore Theatre in Seattle.  W00tstock is billed as "3 hours of geeks and music," but this was more properly "more hours, more geeks, more music."  The show that started at 7pm wrapped up just after 11pm, but still left everyone in the theatre wanting more.

The featured acts at w00tstock are Paul and Storm, a comedic singing duo who I've been fans of for many years now; Wil Wheaton, best known for playing Wesley Crusher in the Star Trek: The Next Generation TV series; and Adam Savage, half of the Mythbusters team and all-around geek. 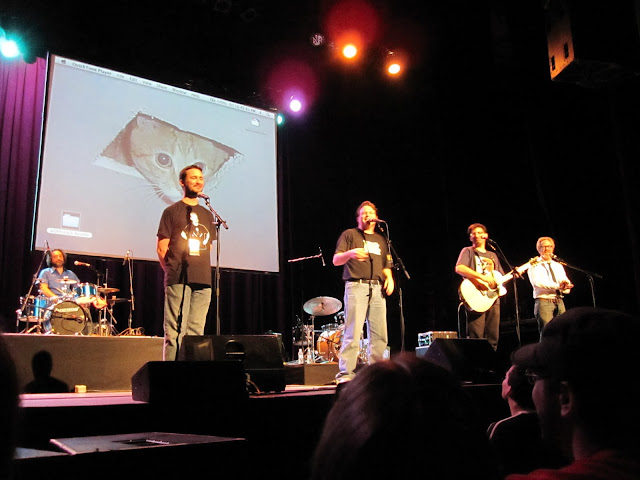 Over 1000 self-proclaimed geeks attended the show, which included many other special guests: 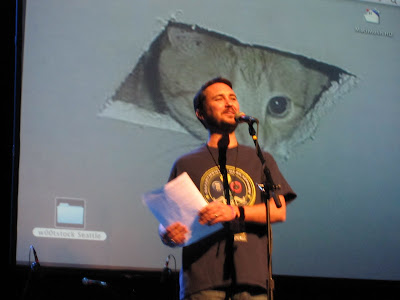 Wil Wheaton was the somewhat master of ceremonies for the event.  Anyone like me who has never been a big fan of Wil Wheaton or his work, has obviously never seen him live and in person.  The man is absolutely hilarious, and I take back all of the bad things I've ever said about him.  Brilliantly geeky, and far exceeded my expectations.
Molly Lewis, YouTube star, and ukulele player (as if that's any bit of a surprise) performed a few songs.  I knew nothing about her (obviously I have selective immunity to viral videos), but she was pleasantly entertaining.
LoadingReadyRun, a Canadian sketch comedy troupe out of Victoria, BC, and also internet phenomenon, showed up to provide some quirky comedic stuff.  One of their featured videos was shown, which was quite funny.
MC Frontalot, a band who performs what they call Nerdcore HipHop performed right before intermission.  I think their music was supposed to be funny... but I have absolutely no idea because I could only understand about 3.14% of the words they sang.  This was probably partly due to the fact that we were sitting in the second row, right in front of the speakers.  But this was sadly the least interesting part of the evening for me.
A surprise favorite of the show was Hank Green, another YouTube celebrity, but one who writes absolutely incredible geeky music.  By far the highlight was his performance of "What Would Captain Picard Do?", which was apparently his first time ever performing it in front of Wesley Crusher himself, who the entire first verse is based on.
Countless Star Trek references permeated the evening, and to no surprise at least 90% of the audience got nearly every reference, even the most obscure ones.  Plenty of other geek references to viral YouTube videos, and video games.  Not being a gamer, most of the video game references went far over my head, but some were so old school I couldn't miss them.
One of the other big hits of the show was Steven "Stepto" Toulouse, a Microsoft employee responsible for "keeping the peace" among the XBox Live gamer community, and laying the smack down on those people who don't want to play by the rules.  What ostensibly began as a 56-slide PowerPoint analysis of trends among bad gamers, quickly turned into a hilarious sermon preached from the pulpit of the Cathedral of Saint XBox. 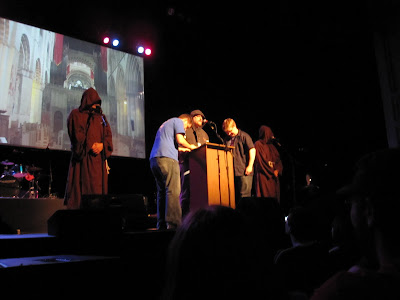 Moving on to one of the headliners of the evening, Adam Savage, Mythbuster-extraordinaire, told some amazing stories of behind-the-scenes at Mythbusters. 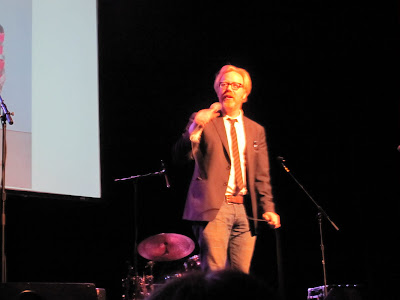 Of course since he was among friends, he brought us some insider video from an upcoming episode of Mythbusters where they will be investigating the following YouTube video validity:
What will happen?  You'll have to tune in in a few weeks and find out for yourself!

Of course, the real catalyst behind w00tstock are Paul and Storm, who never cease to amaze me.  The only disappointment here is that we didn't hear nearly as much of their fantastic music as I wish we would have.  This is the first time I have been able to see them perform live, and they certainly didn't disappoint. 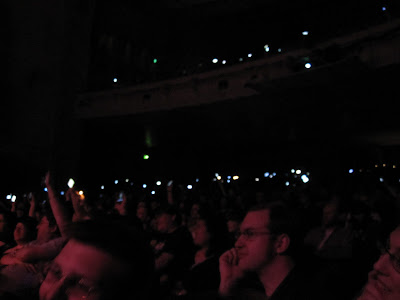 Fans raise their virtual Zippo lighter apps in the chorus of Nugget Man.
The evening was fantastic, nearly 4 hours of non-stop geekiness.  I think w00tstock has a bright future at this rate.  Tonight Portland gets to experience what appears to be a mostly identical w00tstock 2.1, followed by Chicago (2.2.) and Minneapolis (2.3) in June.  If you're in any of these areas, and have any sort of geeky tendencies (or even if you don't), I guarantee you'll enjoy it.

I leave you with the infinite recursion of Wil Wheaton: 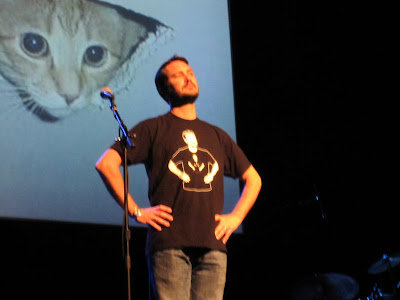