I’ve been meaning to write my trip roundup for the last several months, but other things keep getting in the way (not the least of which was putting my house back together after arriving home from this trip to the aforementioned burglary).  But now that I can reminisce of the awesome trip, here we go:

The trip began with an adventurous red-eye trip through Dallas to arrive in Orlando on Saturday morning.  Sure, it maximizes the vacation time, but it definitely makes for a challenging day of sleep-deprived travel.  But who cares?!  It’s vacation in The Most Magical Place on Earth™!  [note:  not to be confused with Disneyland, The Happiest Place on Earth™]  One of these years I will make it to the other Orlando-area theme parks, but that wasn’t this trip.  Disney makes it too easy to trap yourself in its own version of the magic with the free Disney’s Magical Express shuttle buses that take you straight from the airport to your WDW resort hotel, and then back again when your trip is over.  Who needs (or would want) to drive?

This was my 5th trip to WDW, and my 4th trip staying at the Port Orleans Riverside resort.  Throughout my trips, I’ve visited many of the other WDW resorts, and still based on both the scenic views and the value for the money (one of the Moderate-level resorts), as well as its nearly central location to the entire WDW property, it’s a perpetual favorite home-base. 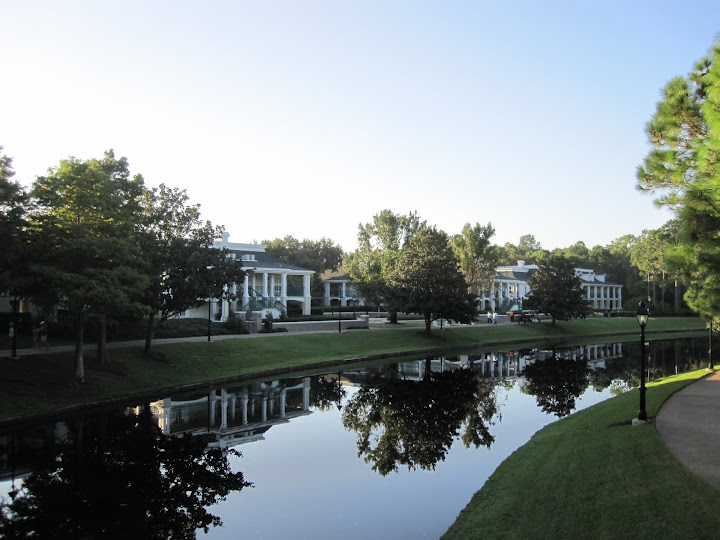 Port Orleans is actually two related resorts, Riverside (the old antebellum South, plantation-style living), and French Quarter (a taste of Bourbon Street and old New Orleans).  An added bonus is the manmade Sassagoula River, which winds its way through the resorts and all the way down to the Downtown Disney shopping and entertainment area. 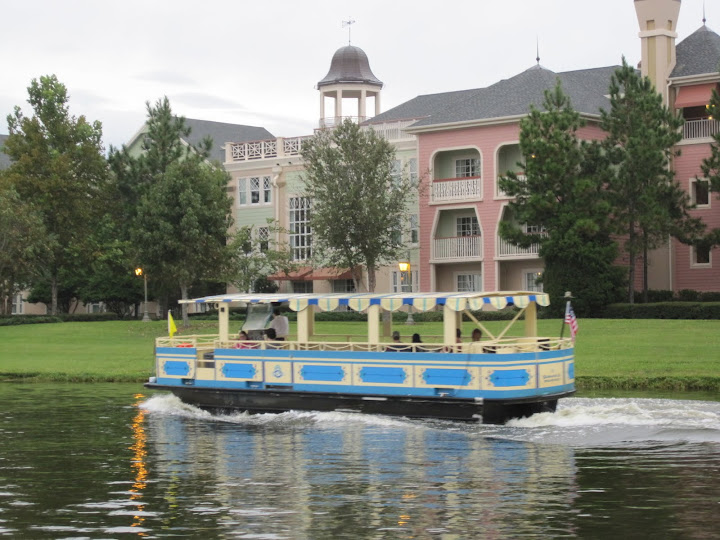 Hard to beat the easy boat ride connecting the two.  But you didn’t start reading this to hear me go on about the resort now, did you?  After settling into the room, we headed over and hopped a bus to my favorite of the four WDW parks, Epcot! 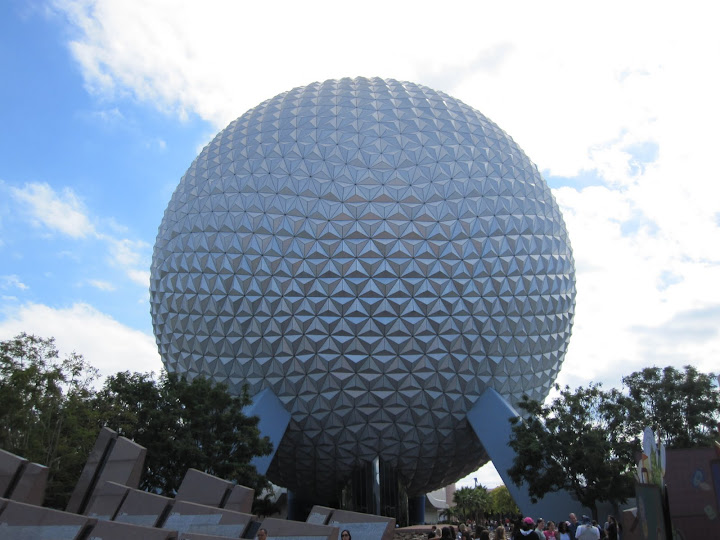 Greeted immediately at the entrance by the monumental Epcot landmark, Spaceship Earth, we made our way into exploring the park.  Lots of activity to be found at Epcot during the fall, as we were there during the annual Epcot International Food and Wine Festival.  What might be compared to a more organized (and only slightly less commercialized) version of the Bite of Seattle, the Food and Wine Festival adds many extra food and cooking demonstrations with celebrity chefs, as well as additional food “taste” kiosks at the various countries around World Showcase.  In fact they add extra countries that aren’t usually represented by the eleven permanent countries’ pavilions.  For those Food Network fans out there, you may recognize this famous chef especially from his show, Dinner: Impossible, Chef Robert Irvine was signing cookbooks and posing for pictures, with the line all the way around the pavilion.  I did not wait in line, but did snap a couple of grainy iPhone pics of random other people posing for pictures. 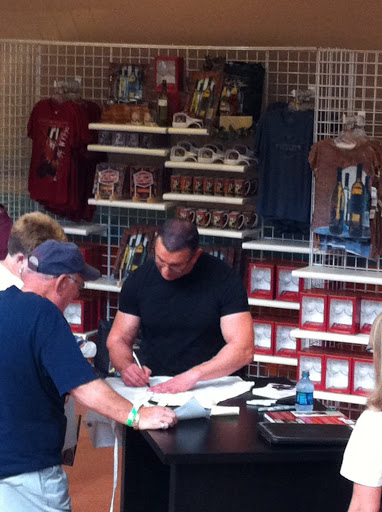 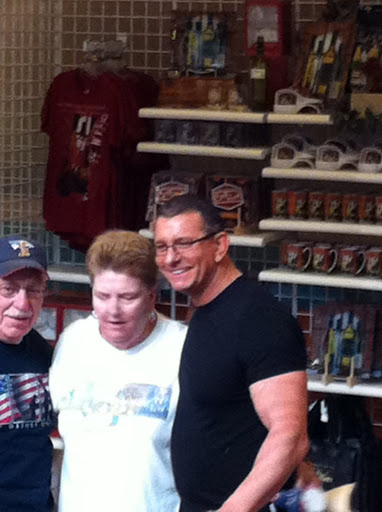 After some adventures and fun in Epcot that day, we eventually made our way later in the evening to catch the Huskies playing Stanford on TV at the ESPN Club on The Boardwalk (an area a encompassing most of the upscale Epcot resorts, and just a short walk from the Epcot park).  If anyone doesn’t remember that debacle of a performance by the Dawgs, I won’t help you relive it.  Suffice it to say, we left at halftime and made our way back to the hotel to catch up on some much needed sleep.

The second day happened to be my birthday, which I reluctantly acknowledged when we were checking in at the resort the day before, and was given a “It’s my Birthday!” button which I decided to wear ONLY on my birthday.  They actually have quite an array of buttons you can ask for, for whatever occasion you happen to be celebrating.  In addition to the “Happy Birthday” buttons we found “Happy Anniversary”, “Just Married”, “Just Engaged”, “Happily Ever After”, “Family Reunion”, “1st Visit”, or if you can’t manage to make any of those work for you, the generic “I’m Celebrating!” button.  I have to admit, wearing the Happy Birthday button throughout the parks, almost every single cast member said “Happy Birthday” to me, whether I was waiting in line, or just wandering through the park.  I can’t say I’d enjoy that on most days, but once in a while it’s kinda fun.

The night of my birthday, we had dinner at the Rose and Crown, a restaurant in Epcot’s UK showcase right on the lagoon.  It was a later dinner, and timed so perfectly that while eating dinner it was time for Illuminations, the nighttime firework spectacular at Epcot.  Nothing like prime seating and not having to wade through crowds to see anything.

Speaking of crowds, there’s definitely something to be said for NOT going in the summer.  Crowds were mercifully minimal throughout most of the week we were there, except for the Saturday we arrived which was slightly heavier than the rest.  Rarely did we have to wait too long for any attraction, except for the most ridiculously popular ones in the parks with fewer big attractions than others (cough, cough, I’m talking to you Toy Story Mania, cough cough).

Monday included adventures at the Magic Kingdom.  Though that night we had reservations at the Crystal Palace, a restaurant right on Main Street U.S.A., which included my first ever experience of Character Dining.  Let me just tell you, if you have kids this is well worth the price of whatever it happens to be if you don’t have to wait in line to see their favorite characters.  This restaurant featured Winnie the Pooh and his friends, each of which makes his way around to your table to personally greet you throughout your meal.  I really didn’t expect this to be too exciting, especially for a couple of older young guys like ourselves, but we played along, and it actually was pretty fun.  I think the characters appreciated having some people other than kids that they could have fun taking pictures with.  When Pooh came by, he immediately motioned with me to coordinate a priceless picture: 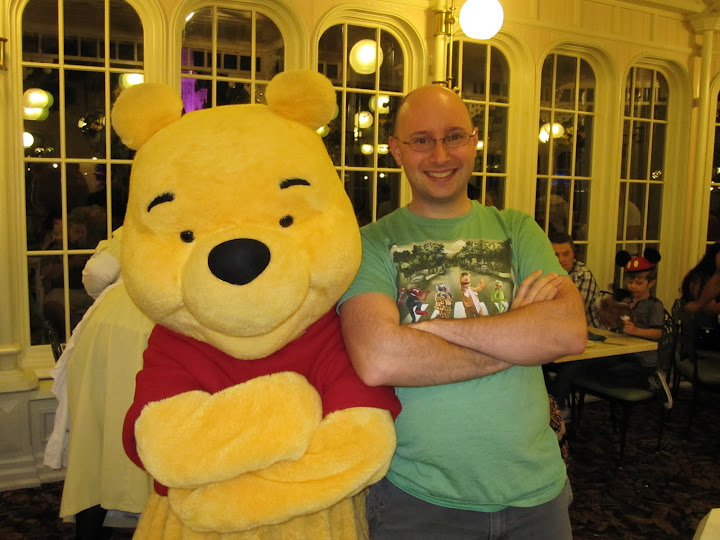 Of course, not to be outdone, I had remembered Andrew mentioning to me that his coworkers often call him Eeyore at work, so it was only appropriate to stage a gloomy picture, that Eeyore was more than happy to oblige: 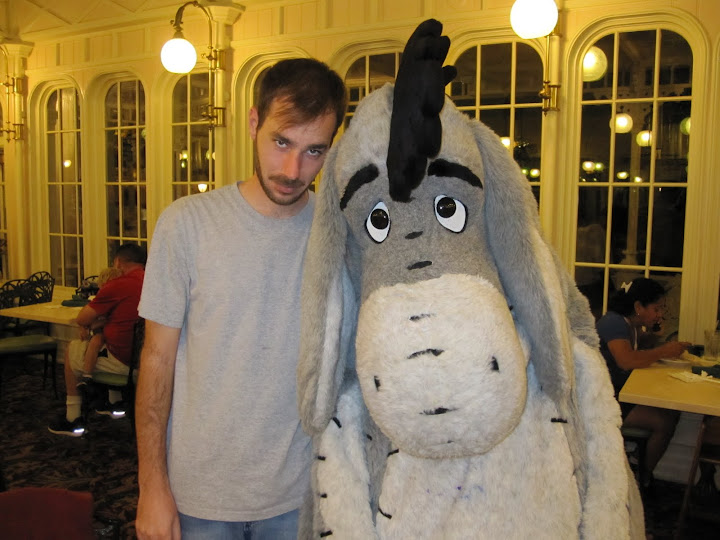 Another first for me on this trip was attending one of WDW’s trademark after-hours parties at the Magic Kingdom.  During the fall, those consist of Mickey’s Not-So-Scary Halloween Party, on selected nights throughout September and October.  The park closes to the day ticket holders around 7pm, and they flush all of them out of the park while those of us who bought the separate event tickets had our way around the park.  The party featured trick-or-treat stations set up at a half dozen various locations throughout the park, where they would fill your bag with handfuls of tasty morsels (though we’re pretty sure they save the good stuff for the little kids). 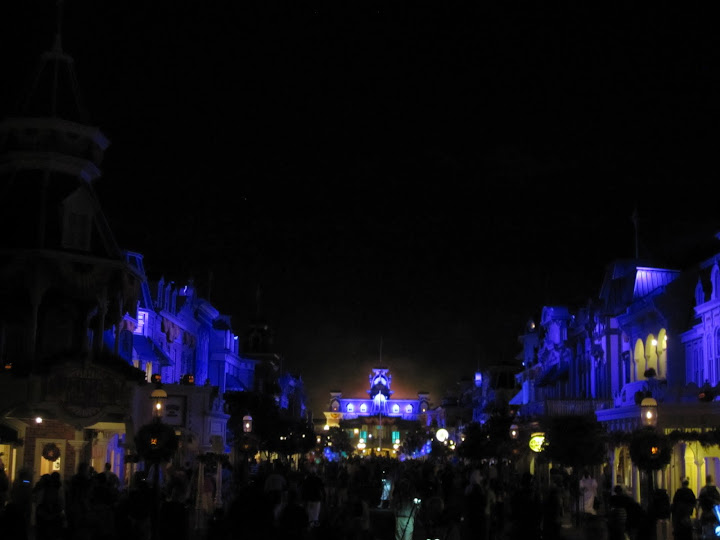 I was very impressed how well they deck the park out for the Halloween parties.  The park is vastly transformed into one giant haunted (but not-so-scary) place.  I’ve always been a fan of the HalloweenTime decorations at Disneyland, but these are far more comprehensive.  They have a special “HalloWishes” firework show, and it’s also one of the few times ever that you can find the Seven Dwarfs out posing for pictures: 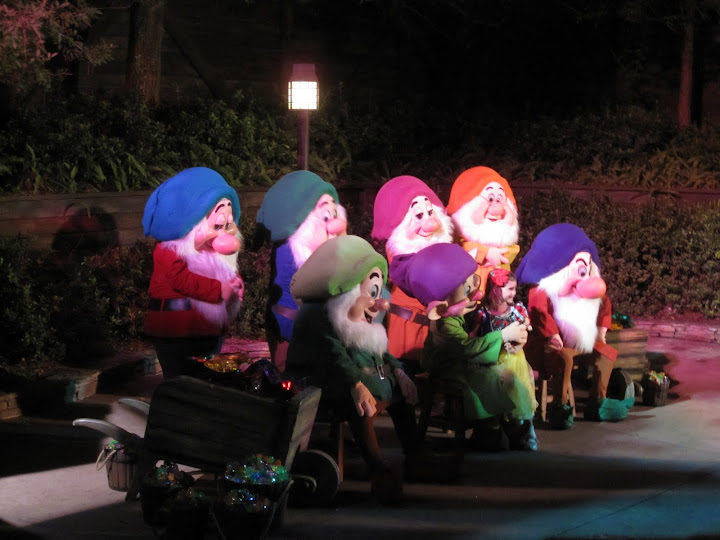 Of course, one of the best parts is that there are so many fewer people in the park, you can pretty much walk on to every ride you’d ever want to!  Not a bad deal, and a lot of special stuff you don’t see anywhere else.

Wednesday we decided to go to the Animal Kingdom park, and caught a great time on the Kilimanjaro Safari ride, with plenty of animals out roaming and in great places for pictures. 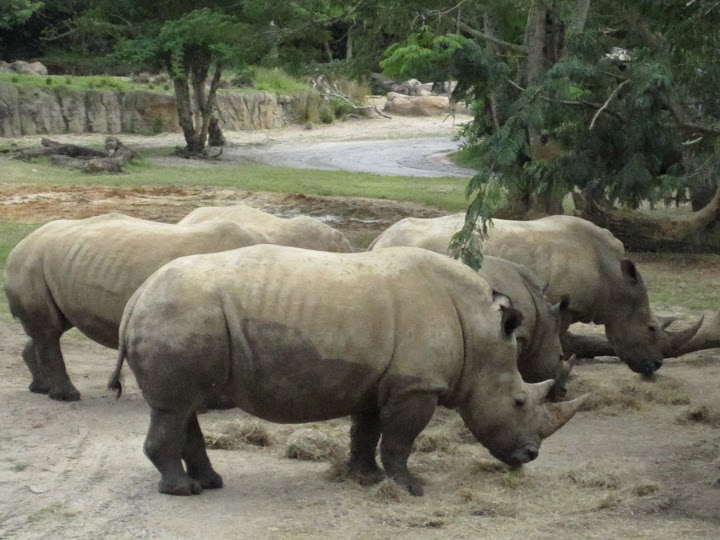 The nice thing about WDW is that you don’t have to spend all-day every-day in the theme parks riding rides.  It’s much more than that.  From enjoying fun and uniquely-themed restaurants, to the various shopping and nightlife areas, elaborate mini-golf courses, and just exploring the amazingly-themed resorts, all under the Florida sun, you never run out of things to do (well, you can do even more if you have an endless pocketbook, but that’s another issue).

Yet another new experience was on Friday, when we went on one of the special guided behind-the-scenes tours  We got to the park at opening and attended the Epcot Future World UnDISCOVERed tour.  There were about a dozen people on the tour, and we given a more detailed history and background information on some of the attractions as well as taken backstage to some of the cast areas to see how Epcot operates and what all it takes to keep it functioning.  Unfortunately, no pictures were allowed in most of those areas, so I’ll leave it to your imagination.  But we visited the ginormous cast costuming department where everyone who works at Epcot goes to check-out their uniform while working in the parks.  We also made it back to the marinas behind the park, where the Epcot area boats are maintained, as well as the firework barges used in Illuminations.

That night we made our way back over to Disney’s Hollywood Studios park. The park at night looks almost like it could be a city street in downtown Hollywood. 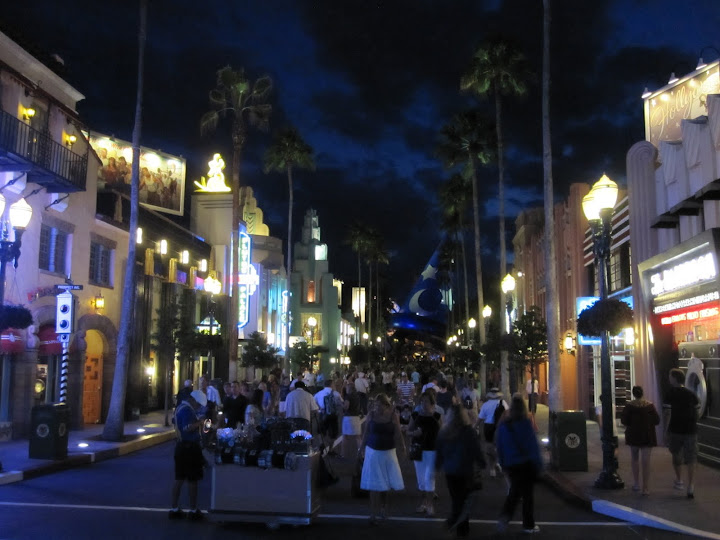 But besides wanting to ride the Twilight Zone Tower of Terror again, our goal was to see WDW’s version of Fantasmic!  Now, this is WDW’s second-incarnation of Disneyland’s original nighttime show on the Rivers of America.  I had warned Andrew that this was a lousy knockoff, though I constantly read and hear comments made by those Disney World obsessed folks that claim that it’s far better than Disneyland’s version.  Different?  Yes.  But better?  We think not.  Yes, it’s a bigger amphitheater, designed specifically for the WDW version of the show. 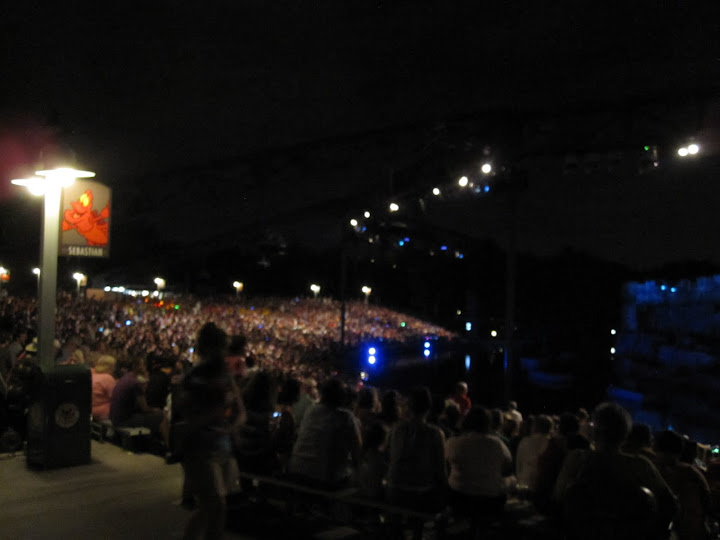 But bigger isn’t necessary better.  They stretched the time to make the whole thing longer, but the problem is that the filler they used turned it into an often incoherent mix of random musical segments.  They Disneyland original has a clearly apparently plot that follows it throughout.  Whatever the issues, it’s enough to make me want to go back to California for the real deal.

Fortunately the only rain or even remotely questionable weather we had to deal with was on the last day we were there.  The rest of the week was sun, warm, and no humidity, just the way I like it. 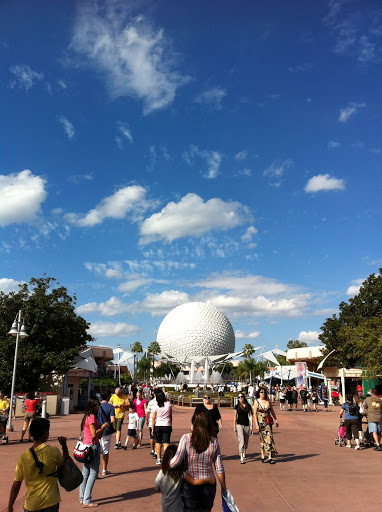 Sadly the trip came to an end.  The only thing that makes the trip more fun is having more friends go along too.  Who knows when the next WDW adventure will be, but maybe there’ll be something new to celebrate?  Doesn’t that sound like fun?  I think so. 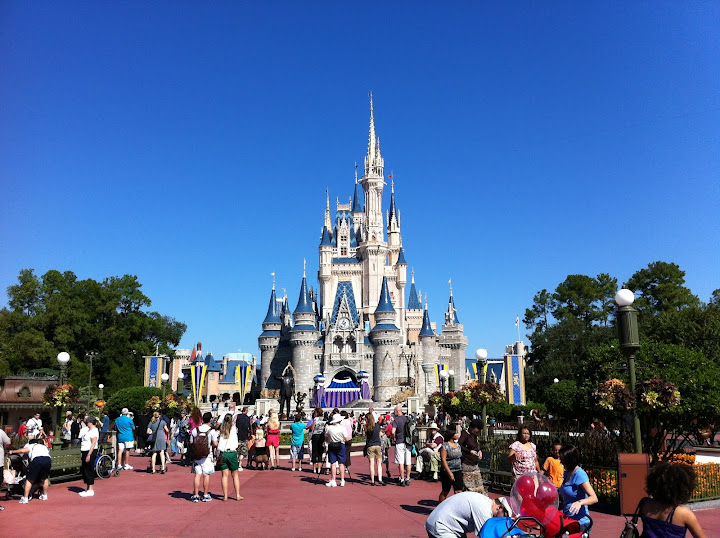 Great info. I love all the posts, I really enjoyed,
nice post and site, good work!
I would like more information about this, because it is very nice.
chilis coupons