Street where the riches of ages are stowed… – Day 14

I started my last day in London with a walk down to Portobello Road.  For those who have never seen the lesser-known Disney movie Bedknobs and Broomsticks, starring Angela Lansbury, this probably won’t mean much to you.  Though I’ve seen this movie way too many times to remember, and can’t get the Portobello Road song out of my head. 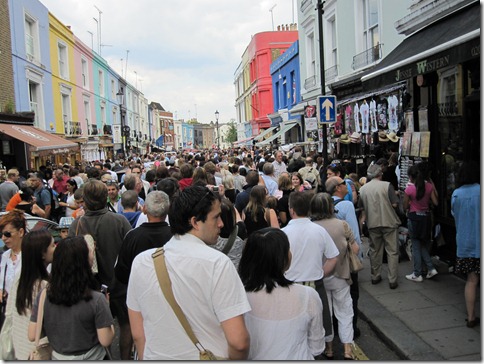 On Saturdays this street turns into a giant street market, selling everything from antiques to new chotchkies, to a more conventional farmers market with produce and other foodie goods.  And of course, the usual unique street performing entertainment. 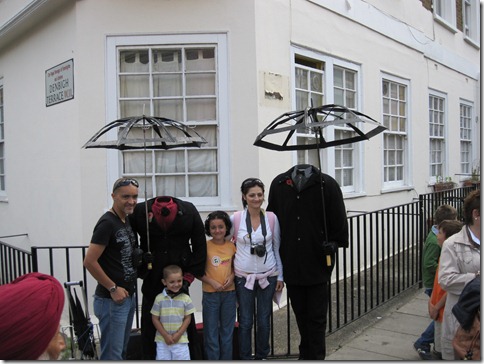 After a nice walk down this road and buying nothing, because I found no junk that I never knew I needed, I hopped the tube across town towards St. Paul’s Cathedral, famously in another Disney movie, Mary Poppins, where the old lady fed the birds.

Along the way, I stumbled upon the Museum of London.  This wasn’t on any of the maps I had, but I stopped in anyway (it’s another free museum, so what did I have to lose?).  It was actually a very interesting museum specifically talking about the history of the city of London, with plenty of interactive things to play with (because just like any kid, I get bored in museums pretty easily if there isn’t stuff for me to play with).  It was a worthwhile diversion.  They should put these on maps.

Finally continuing down the street, I made it to St. Paul’s Cathedral.  One small problem I hadn’t accounted for, however, was that on Saturdays it closed to visitors at 1pm.  Apparently Jesus needs his naptime.  Waah waah.  I lose.  Complete failure of planning. 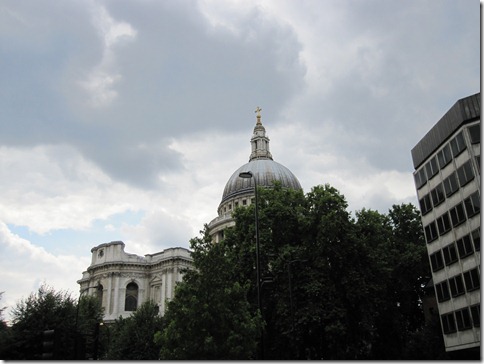 But what can I do?  I continued on down to Fleet Street, and kept walking around town.  Next thing I knew I was in the West End’s Theatretown, and there were theatres everywhere.  Being Saturday, they all have their matinee shows, and I walked past a theatre showing a new musical that I had seen advertised quite a bit around town this past week, Betty Blue Eyes. 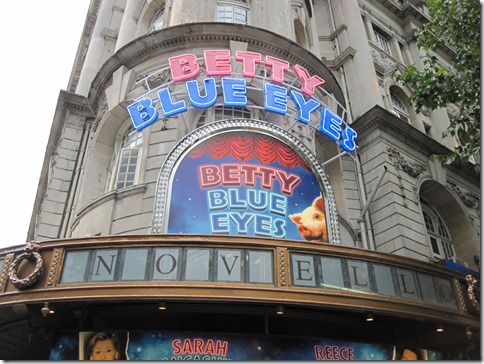 There were still last minute day of show tickets available, and the show started in just 15 minutes, so I plopped down 20 pounds and grabbed a seat in the 3rd row of this beautiful theatre having ABSOLUTELY NO IDEA what this musical comedy was about.  It story was set in Britain during the food rationing times of post-WWII, specifically around the time of the royal wedding of then-Princess Elizabeth and Philip.  The plot is entirely centered around key points in British history, which while an entertaining story with good music, would probably have a rough time playing to US audiences on Broadway.  Though I’d have to say it was worth what I paid to see it, and I enjoyed the well done show.

Following that, I walked my way back across Oxford Street and the shops that still didn’t have anything worth buying.  But walking around the city as much as I have, this is the first time I’ve been in a city where people drive on the “wrong” side of the street.  And it’s confused the hell out of me.  Ultimately, the only thing that has saved me countless times when crossing at crosswalks is the abundant use of instructions to those crossing. 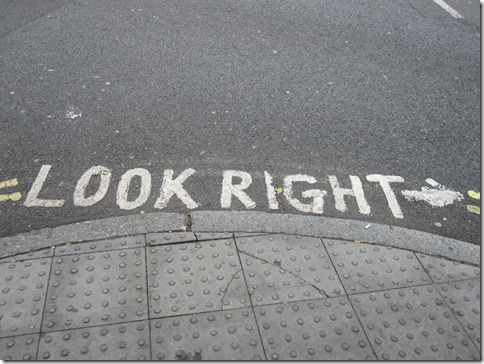 I’d say they put these in solely for tourists, but that would be wrong. I think the locals use them just as much.  The problem is that you never know if the road you’re crossing is a one-way this way, one-way that way, or two-way street, each of which requires you to look a certain direction.  LOOK RIGHT –> and <- LOOK LEFT are the most important words you ever see.  Once you do that, the system works.  Though even after a week in the UK, I can’t for the life of me remember which direction traffic is coming at an unmarked crosswalk.  But the tricky part that I instantly realized is that not only do they DRIVE on the left, trains and subways travel on the left of each other, so at the train platforms you’re expecting the train to come from the other direction.  AND, walking on the street, you tend to walk on the left too, though with so many tourists in town, that quickly becomes a disordered mess.  Walking down the middle or against a wall seems to be the most efficient way to get through things.

Well, the bags are repacked, ready to head off to the airport in the morning for 14 hours of in-flight relaxation.  Unfortunately, no direct flight home this time, so I have to split the trip in half with a stop at JFK in New York.  It’ll be a long day.  But fortunately the holiday weekend yields a day of recovery on Monday.

For you avid blog readers who have followed my journey, I hope you’ve enjoyed it.  I’ll try to keep up with some intermittent blogging before my next adventure, but we all know how that goes.  Thanks for the memories.  Please tip your waiter.  Good night.