Day 13, nearly at the end of our journey, but today was a bit more upbeat as I traveled to some of the more royal landmarks in London.

The day began with a stop by the Royal Mews, where all the Queen’s horses are stabled, along with the royal carriages and motorcars.  Of particular interest was an up close look at the Glass Coach which has famously been seen in many royal weddings, notably carrying Princess Diana to the wedding with Charles. 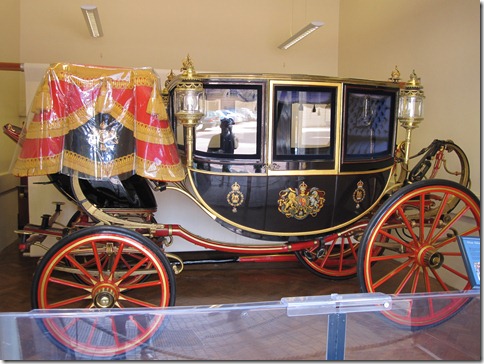 Following a brief stop at the Queen’s Gallery, which displays selected paintings and other artifacts from the Royal collection, I made my way down the street to Buckingham Palace. 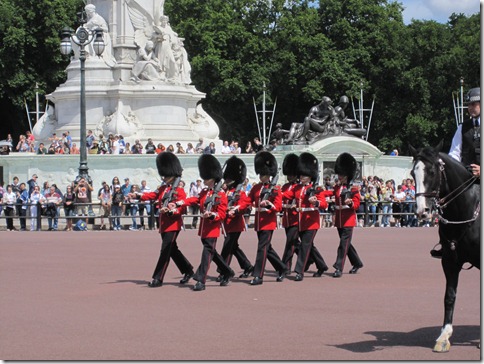 I hadn’t planned to see the Changing of the Guard, but just happened to walk past at the right time, along with the throngs of people who had lined the plaza to watch.  Almost every reference I read said that the changing is completely overrated and not to waste your time, but since I was there, I joined the party.  It wasn’t so bad.

OK, so what I really enjoyed was the royal beefeater band.  They were rather good to listen to, and it was nice watching them march out. Not a large group, and as usual the clarinets are in the back of the block, but that’s to be expected. :)  They were followed by men with guns, and then a second group of just drums and fifes (or piccolos as the case may be, historical accuracy be damned).  They were fun too, but need a lesson in keeping the piccs in tune.  Seriously.

Watch the band marching
Watch the drums and piccolos marching

Continuing on I went to the Churchill War Rooms, which were the underground bunker rooms used by Churchill and the British cabinet members during WWII.  These were surprisingly interesting, and well worth the stop.  This also included the Churchill Museum, which was basically a biographical museum all about the man himself.

Just next door is 10 Downing Street, home of the current prime minister.  It’s not quite as glamorous as 1600 Pennsylvania Avenue, but it seems to have nearly as many men with guns standing out front.  I could see about this much: 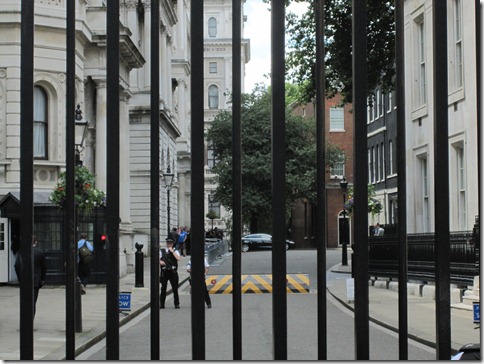 I was not on the guest list, so I moved on.  I apparently was on the guest list at Westminster Abbey, where I couldn’t take any pictures inside, but got some nice ones from outside worth seeing. 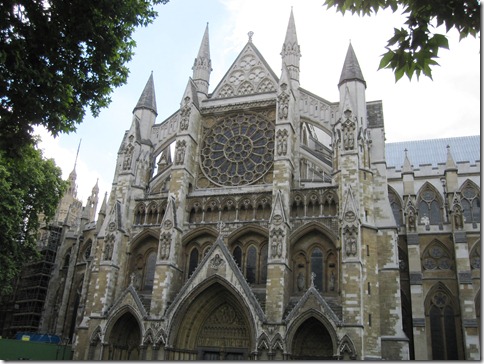 This place was second only to the Tower of London in terms of how many people were touring it.  And since it’s so much smaller relatively, it was next to impossible to get around in there.  But I still saw plenty of old stuff, and dead people crypts.  Classy.

From there, time had escaped me a bit, but I wanted to make my way down to Greenwich, and took a river cruise from Westminster down the river.  Sadly, it took about an hour and a half to get there, and I didn’t make it off the dock until a bit after 4pm.  Hustling up to the places I wanted to get, I had basically the option of going to the National Maritime Museum, or the Royal Observatory up the hill, in the time I had left.  I decided to walk part the museum and head up to the observatory, which I arrived at about 20 past 4pm.  I head on in, and actually viewed some rather impressive displays on timekeeping and how it all developed.  And more importantly, I saw the arbitrary line of no particular significance, except that they had to draw 0° somewhere and these people decided it would be through the Royal Observatory in Greenwich: The Prime Meridian. 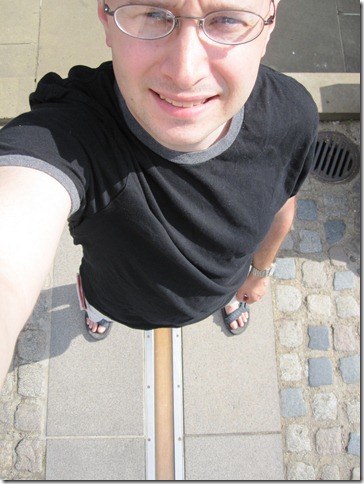 This classy self portrait of me standing halfway in the Eastern and Western Hemispheres was my souvenir of this part of the journey.  Now my ironic gripe of the night:  I was informed when I entered the observatory at around 4:21pm that it closes at 5pm.  Fine, I figured I could see plenty by then.  I make my way through seeing things, and just as I’m heading into the last building, at 4:45pm, the lady tells me that they’re closed, and they kick everyone out of the place.  At 4:45pm.  WHAT THE DEAL?  The sign clearly said “Closes 17.00, Last admission 16.30”.  You would THINK that the place that DEFINES THE TIME FOR THE ENTIRE WORLD could at least get the time right.  C’mon Greenwich.

Once I got over that, I went into the town of Greenwich, where I found a nice pub and had a tasty hamburger, for a reasonable price, which included a pint for only 50 pence more, so who could argue with that.  On the TV the big match that had England captivated was the Wimbledon semi-final between Britain’s own Andy Murray and Rafael Nadal.  The world seemed to stop so everyone could watch this.  Even back in the city up on Oxford Street, an outdoor pub garden was packed with onlookers watching on the TV. 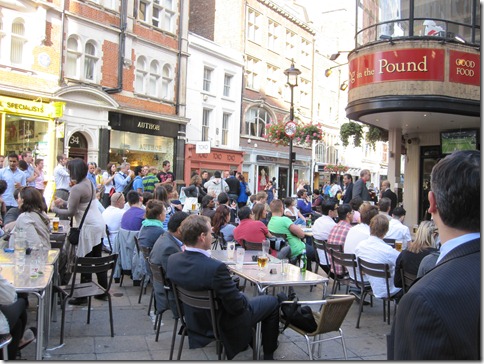 And finally, on my walks through town I passed by another of the famous town squares, this one immortalized in song, Berkeley Square. 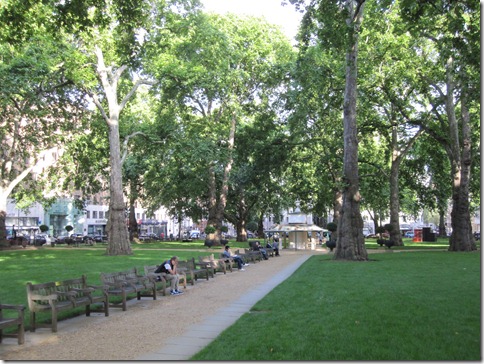 Though I heard no nightingale singing over the hustle and bustle of a busy city, it still looked like a nice place to mention in a song.  I leave you with that song.