It turned out to be a rather dark and bleak day today, but not weather-wise, only topically.  The adventures started out with a trip to the Tower of London, formerly the Alcatraz of the British Empire, and now probably the most visited tourist attraction. 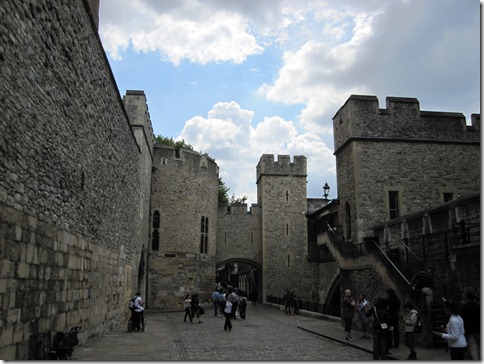 This is actually an amazing place, and besides getting to see the Crown Jewels of yet another country, the whole place is VERY well done.  There are plenty of tours of the grounds led by the local Yeoman Warders, aka the Beefeaters.  I caught parts of several, and I actually in hindsight would have just stayed with the guided tour the whole time, it was that well done.  The Beefeater knew everything under the sun, and was highly entertaining.  Though gruesome at times, it was very educational and historical.  A few highlights: 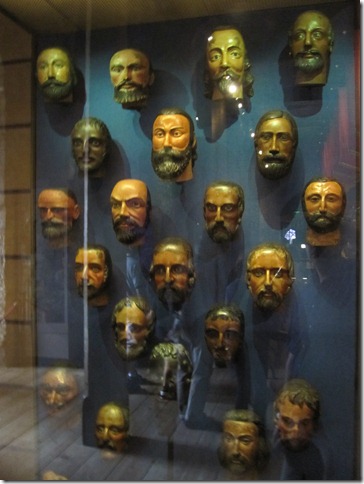 A display of the Heads of State?  OK, that was not really a highlight, but was worth the cheap laugh. 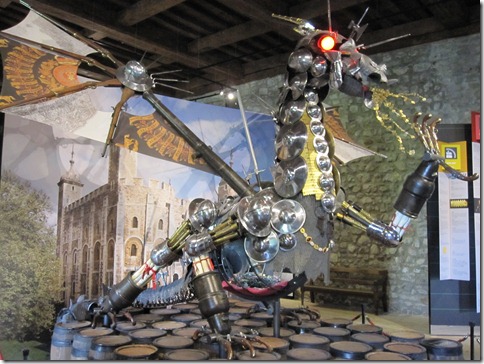 This dragon was kinda odd too, but I thought it looked cool.  After a little over two hours in the Tower of London, I moved down the river to the Tower Bridge. 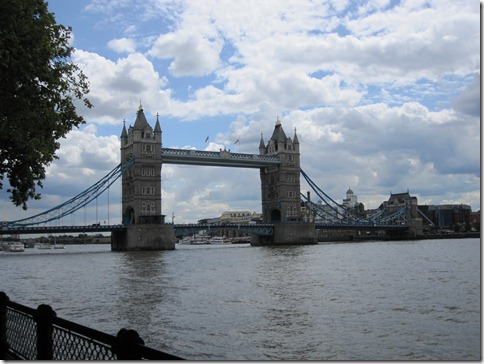 I did go up inside the tower, which is an attraction in its own right.  But it was pretty lame.  Probably the only lame thing I did today.  I guess nothing’s perfect.

Once on the other side of the river, I went on recommendation to the Winston Churchill’s Britain at War Experience.  This place wasn’t much on the outside, and looked rather cheesy and half baked in the entrance.  But despite the fact that it was less than technically impressive, it was actually quite captivating.  Its focus was the Blitz on Britain during WWII from the British perspective.  Like any good WWII museum, it had lots of artifacts and stuff, but this one made you feel like you were actually there, not just through pictures.  Well worth it.

Finally the London Bridge Experience and London Tombs was nearby.  I had no idea about this one, but it was free with my London Pass, and I walked by it.  It turned out to be part history lesson, part interactive live theatre, and part haunted house.  OK, well, the whole thing was haunted house, basically.  The first part led the group through several scenes with live actors in character leading the group on the dark history of the London Bridge.  From there, we “went down into the tombs”, where it basically turned into a gratuitous haunted house, where live actors try to scare the pants off of the guests.  I found the whole concept to be incredibly hokey, but so well done (even rivaling Disney’s standards of theming), that it was actually something I would say not to miss.  And yes, it was scary.  And dark, very very dark. 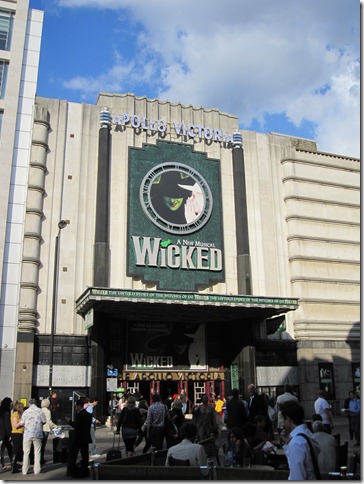 The night concluded with taking in a West End show.  I had looked at what was playing around town, and didn’t really find anything in particular that I hadn’t seen but really wanted to, so decided to go to one of my favorite musicals, Wicked.  It’s amazing to see it in a permanent theatre, as I usually only see touring productions that have scaled back and transportable sets.  This was elaborate and altogether a great show.  Though it was a bit odd to hear the musical with British accents, I actually believe that these people enunciated much better than the past two touring productions I’ve seen in Seattle.  I could clearly hear many of the lyrics that I knew but are all too easily slurred and blurred on stage. 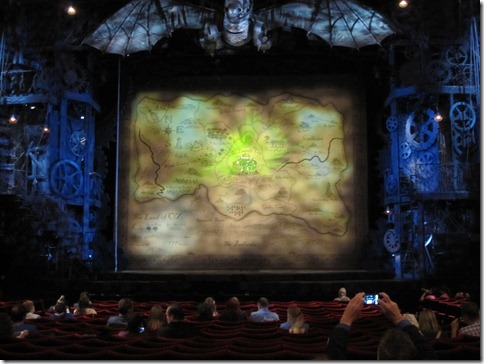 It was also very cool to see one of these old theatres.  At least I assume it was old, it was pretty cool.  One thing that is odd in the British theatre world is the different names for everything.  What we in the US would call the Orchestra Level or Main Floor, they call the Stalls (though I have no idea why).  The balcony, or mezzanine, they call the Dress Circle.  I’m sure there’s ye olde English explanations for these, but I have yet to bother to figure it out.  So it is.

Tomorrow I think I’ll head to Westminster Abbey, and probably other places around the central part of London.  Or I’ll start wandering.  I gave my feet a bit of a rest today and took the Tube around most places, so maybe tomorrow I’ll be recovered enough.  But first I must sleep.