So much to say about Paris.  And I’m too tired to say most of it.  But we’ll start anyway.

I made my way from Sweden to Paris on a plane.  That flies in the air.  Varoom, woosh.  Anyway, once I arrived in Paris, I hopped the RER train down to the Gare du Nord and walked about 7 or 8 blocks to get to my hotel, dragging my stuff all the way there.  BUT, in a lovely beginning to my trip, on the train from the airport to the city, we stopped at one stop and a guy with an accordion walks on and starts playing.  Then of course walks through the train asking for money.  So this is the France I’ve heard of.

First observation:  does this city not believe in escalators?  Even in the train station I was hauling my stuff up and down stairs.  Come to find out, it’s that way throughout the whole city.  OK, there are escalators occasionally, but for the most part it’s vastly a stair-based city.  Which is hard on the feet.  I digress.

From my hotel, I ventured out into the city.  As I always like to do when I start my trips in a new place, I do an orientating wander.  Basically, I just start walking and see where it takes me – around my hotel, towards the typical touristy parts, just to see where it goes.  Next thing I found myself at the Louvre, about 2 miles later.  It was a wandering 2 hours, and it didn’t really feel like that much, but by the map it had to have been. 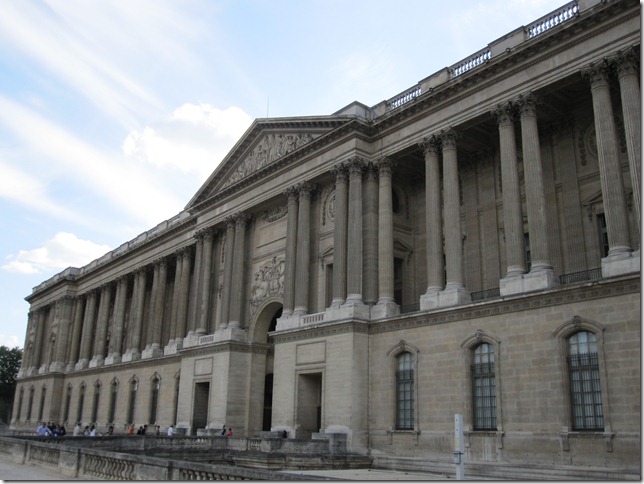 I wasn’t planning to go to the Louvre until the next morning, so instead I walked straight across, through the center of the Louvre plaza, past the famous pyramid, through the Jardin des Tuileries where the locals were all out relaxing… 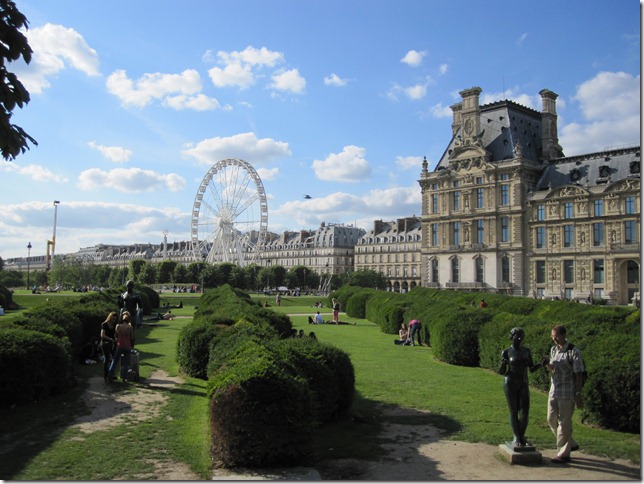 … past the Place du Concorde… 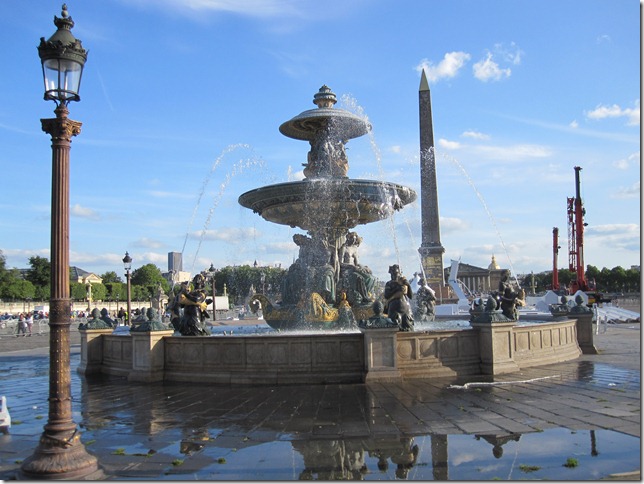 … and on to the Champs Elysses.  These places look close to each other, because they are, but it still takes forever to walk through them.  I walked the most famous street in Paris from one end at the Louvre, all the way to the other end, at the Arc de Triomphe.  This became the first of the famous Paris landmarks I climbed to the top of.  But the views were spectacular. 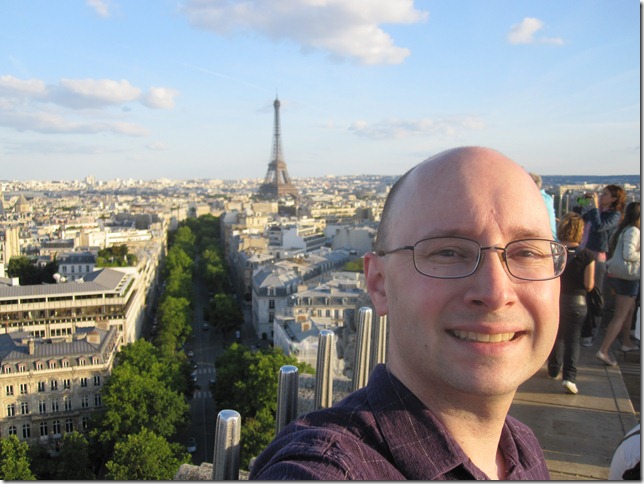 Paris is huge.  Well, it looks huge anyway.  All of the buildings are the same height, and they all stretch for as far as the eye can see in every direction.  I remember the tip I got when traveling to New York for the first time… go to the top of the second most famous building, that way you can see the most famous in addition to everything else.  In that case, I went up to the top of the GE Building at Rockefeller Center, but this time it was the Arc de Triomphe.  Good choices both times.

And now we come to the part of the show where we discuss some rants and raves of the city. 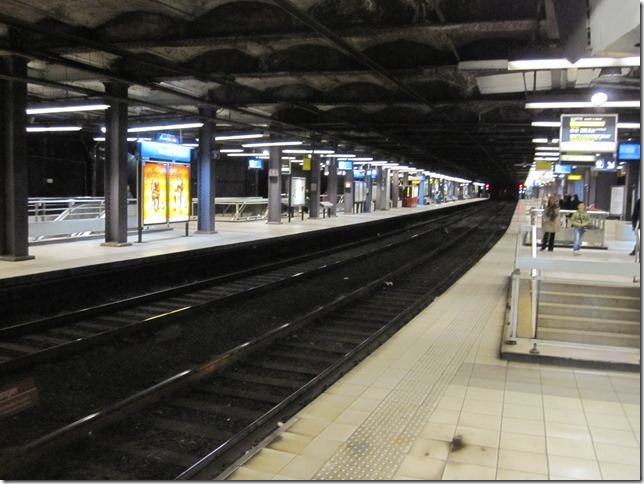 I am a connoisseur of awesome public transportation systems, and to this I give a tip of my hat to the Paris Metro.  This has to be the most efficient of all subway systems I’ve ever been to in the world.  Trains appear quickly, they load and unload without wasting time, and they get you where you need to go quickly.  It’s also a pay-to-get-in system, like New York or Chicago, where you pay to enter the Metro, and from there you can get anywhere you want to, transferring from line to line as necessary.  None of this pay-by-the-distance crap.  Approved.  Clean and efficient.

AND, the most brilliant thing.  Every major station has a bunch of exits, usually sprawled across an entire city block.  This is no different than most cities’ subways.   But in Paris, the exits are all numbered, and there’s a map on the wall to point out which number exits where, so you don’t have to guess by street names to figure it out. Simply brilliant!

I do have a couple of complaints… 1)  Enough stairs people!  Put some escalators in once in a while. My feet are killing me.  2)  As efficient as it is, London’s Oyster Card has every other system in the world beat for efficiency of payment.  At least Paris does have visitor passes, which allow unlimited transport within the city for a certain period of time, but this involves a paper ticket that goes through the turnstiles over and over.  Whereas the locals all have the Oyster-style touch cards that just tap at the gates.  C’mon, let the tourists have the same convenience.   But overall, definitely a fine transportation system.

RANT: Panhandlers
Panhandlers, con artists, impoverished youth, call them what you will.  This is a common issue among every major tourist city I’ve been to, but the French ones are the most… unique.  Not like the streets of Seattle back home, where the panhandlers will just shake a paper cup at you asking for spare change then leave you alone, no, none of that.  Interestingly enough, they all start out “do you speak English?” obviously because the French-speaking locals are too smart to fall for their ploys.  Racket #1 was the middle-aged man in the tweed suit with the old “I’m a tourist from New York and someone picked my wallet, do you have a few bucks to help me out?”  First of all, if you lost your wallet, you’re gonna need more than a few bucks to solve your problems, and either way I’m not going to be able to help you.  That one might work with the Brits, but a fellow American isn’t gonna fall for that one.  Racket #2, the passive panhandling.  Usually some Muslim-looking young girls, in the typical garb, kneeling in the middle of the sidewalk with a paper cup sitting in front of them.  At least they’re passive enough, but I’m unimpressed.  But at least it’s not a straight con, and I appreciate that.  Racket #3 (and by far the most prevalent), the “sign the petition to help the deaf-mute people (and give a donation)” con.  This one’s hilarious, because if you think about it, it makes no sense whatsoever.  You have some kids who back home would look like professional petition signature gatherers, with what looks like a very poorly photocopied signature sheet with at the top that says something to the effect of “I’m deaf/mute, please help support me”.  The list followed with something on the order of 10-15 signatures (all of which looked similar, but may have been previous dupees), followed by the amount of their “donation”.  They shove it in your hands, and point at the headings at the top, and ask you to sign it.  Then they point out the donation part.  The one that was put in my hands, the entire column was filled with 20 Euro in the column.  I laughed.  I signed it anyway, and offered the girl 0.10 euro.  She didn’t take it and walked away. ha.  Failure #1:  If you’re pretending to be deaf/mute, don’t walk up to me and ask if I speak English.  Failure #2:  Do a little better at forging the paper before showing it to me.  Failure #3:  Don’t ask an American from the city, we’re used to it.  You want me to give you money, play some music.  I throw large bills at struggling musicians who are out on the streets playing for money—if they’re good.  And I have twice so far on this trip.  I’m a sucker for the accordian and trumpet duo.

More on Day 2, coming up next!