On the third day, I walked.  A lot.  But first, the closer from Day 2.  No trip to Paris would be complete (I guess) with out a stop by the famous Moulin Rouge! 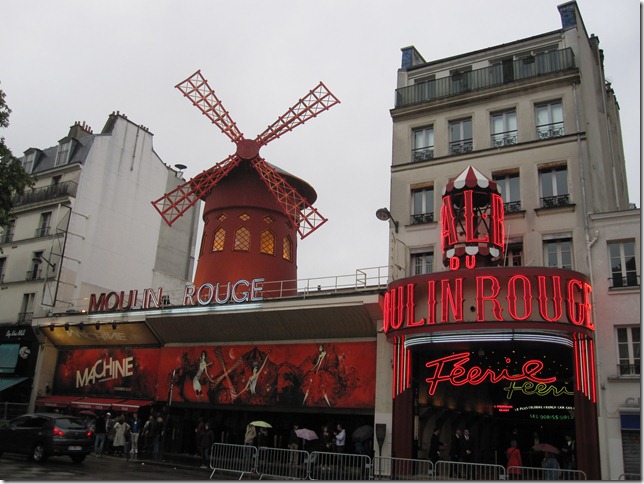 Spectacular! Spectacular!  Or whatever.  I made the trip out as far as to take a picture of it, and then hopped the metro across the street back home.  Not exactly the most fantastic part of the city at night.

Anyway, to day 3.  The day began with a climb up the tallest hill in Paris, Montmartre, to visit the Basilica of Sacre Coeur. 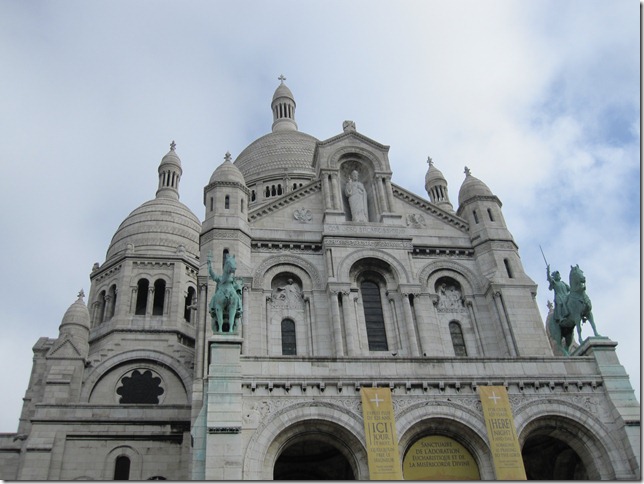 I ventured up the 300 steps to reach the top of the dome.  And let me tell you, those are a lot of steps.  I don’t know what my obsession with climbing to the top of monuments when I go on vacation is, but it seems to be quite the trend. 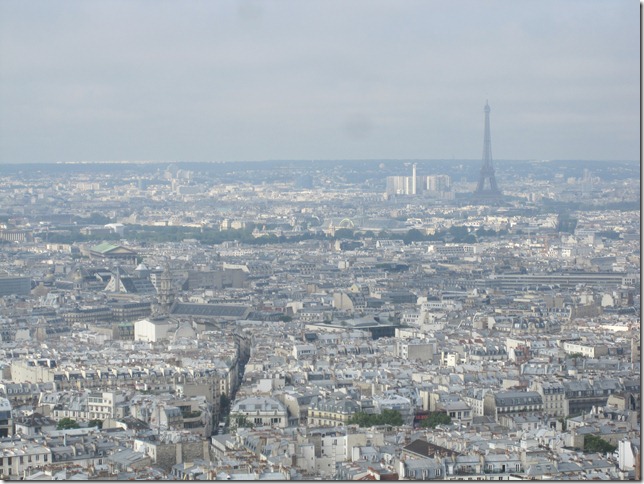 From the top you have more spectacular views of the city.  Have you ever noticed how all the buildings are practically the same height?  Maybe that’s what makes the city seem so strange to me.

Following my adventures to Sacre Coeur and a walk through scenic Montmartre, I headed over to towards the south of the river, and stumbled onto another large domed structure, the Pantheon.  It’s almost reaching the point of “you’ve seen one dome, you’ve seen them all”, but this was particularly interesting, as its crypts house some famous folks the likes of Pierre and Marie Curie, Victor Hugo, Voltaire, and Louie Braille. 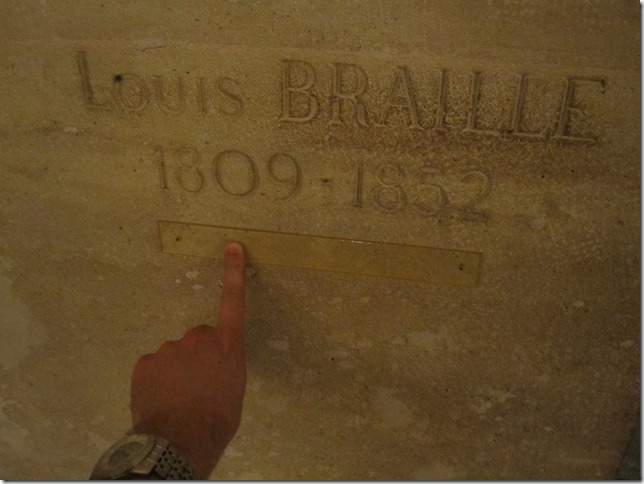 Yes, Braille’s crypt is the only one also written in Braille on the outside.  Imagine that!

But more fascinating to me was the center of the Pantheon, under the dome, which is where Leon Foucault first hung a pendulum to demonstrate the rotation of the Earth.  This became known as the Foucault Pendulum, and while not the original, they have recreated his original experiment in the same location: 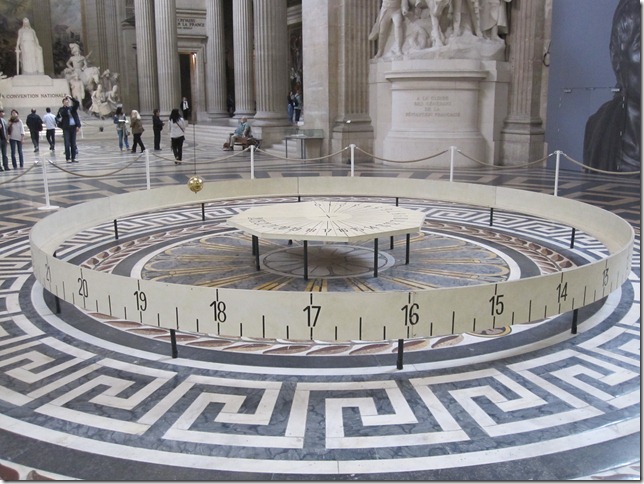 For a science geek like me, this alone was worth the price of admission.  While most people just wandered by and were like “huh?”.

From the Pantheon, I made my way to an interesting little district in Paris called the Place des Vosges.  Characterized by narrow streets filled with shops and galleries, it was buzzing with people.  And after picking up a sandwich for lunch at a local Boulangerie, I passed by an Italian gelato shop, and determined that I had to stop.  My mom would have stopped, and then gawked at how expensive it was, and bought some anyway.  I had a delightful combination of chocolate and cherry gelato.  It was delicious. 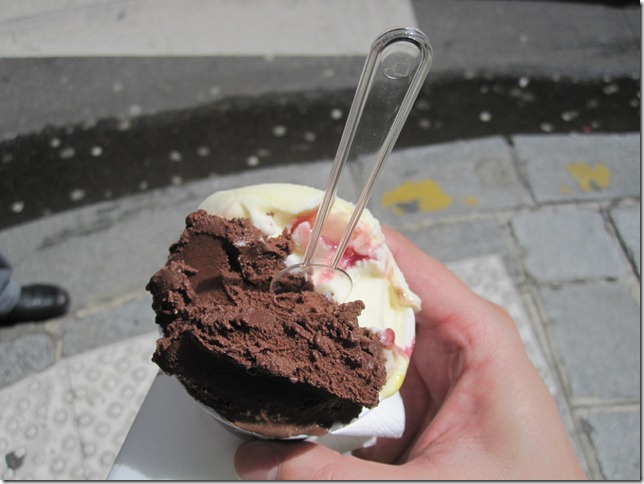 After all my miles of walking, my feet decided it was time to head back to the hotel and relax.  So I hopped the nearest Metro back home, but while in the subway station, heard some music coming from down one of the corridors.  Not to pass up an opportunity to find some music, I wandered down and found this group playing some pretty awesome music.  If there were such a thing as French Mariachi music, this would probably be it.  Three accordions!  How awesome is that?! 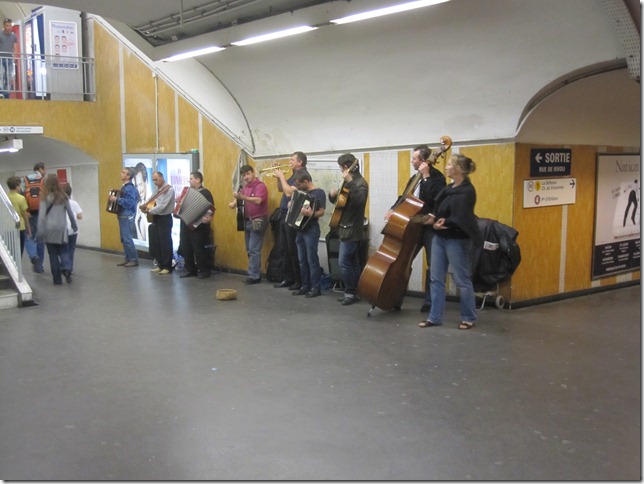 And finally, we wrap up with a few additional observations from Paris.  Paris is an interesting city.  The people seem to be both lazy and hurried if that makes any sense.  I want to be enamored by the city, but honestly I’m not.  It has the things in a great European city that I enjoy: historic old-European feel, efficient transportation.  But it also feels like too big for its own good.  I enjoy the artistic history of it, but I’ve had enough.  For now.  Maybe I’ll come back and give it another chance later.

Tomorrow I’m off to take the Eurostar through the Chunnel and over to London for a couple of days of excitement in an English speaking country.  Time to find some of the pre-Olympics festivity and enjoy it.