It’s another bright morning in Paris, and time to venture out on our way.  Unfortunately, it’s no longer sunny and warm, it’s cloudy and grey. But early on, it’s dry at least, so we’ll go with that.

I make my way to the Louvre first thing, and good thing I did, because the lines were minimal.  Not so much about 3 hours later when I left and the lines were all the way across the giant plaza, probably at least an hour wait just to get in.  Not my style.  I don’t even wait that long for a ride at Disneyland.  Where’s my fastpass? 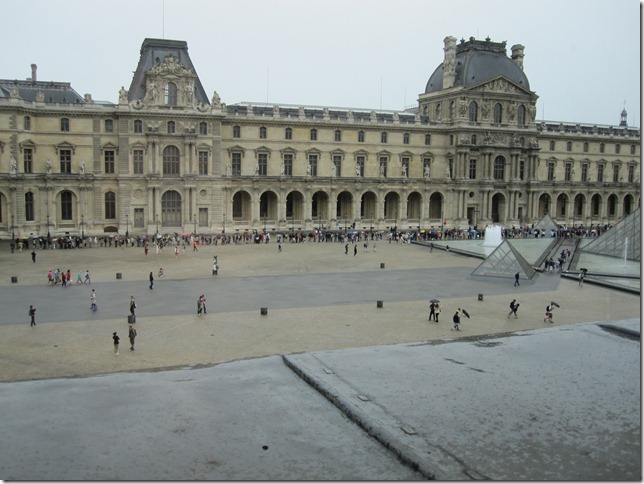 The line later in the day… all the way down the plaza.

Anyway, everyone has said it, but it’s hard to believe it until you’re there.  The Louvre is GINORMOUS!  Like crazy.  I had to take a map of the place and draw a line on it with my route through, just so I wouldn’t get lost.  But of course, the place is also gorgeous.  I was probably more fascinated by the galleries and the architecture itself than most of the contents inside.  But what I found the best at the entire museum?  The people watching!  OMG, what a hilarious time watching all of the tourists clamoring over one thing after another.  I walked into the room containing the Mona Lisa, and was immediately compelled to take a picture.  Not of the painting, but of the rest of the people all taking pictures of it. 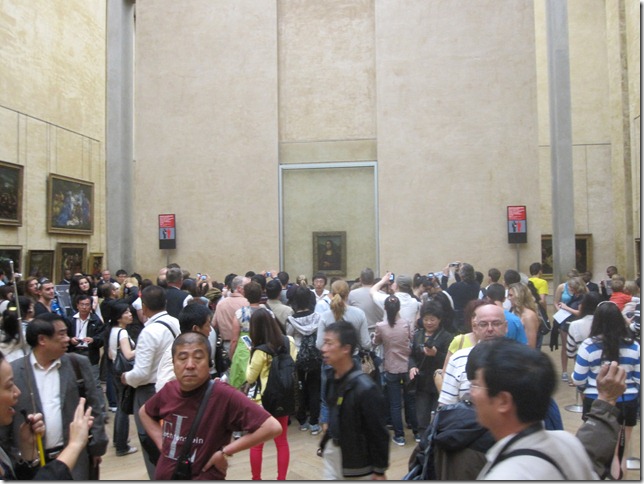 This was the highlight of my day.  I was trying to restrain my laughter.  C’mon people, yeah it’s the Mona Lisa… but you know what it looks like.  You can find countless pictures in books or online (the same could go for most everything in here, no doubt), so WHAT is your obsession?  Hilarious.  But that wasn’t the best people watching of the day.  That has to go to the younger-aged Asian woman who had the big camera, and entered this large room I was in, and immediately starts walking from painting to painting, snapping a picture, snapping one of the sign, and moving to the next one.  It was well-tuned and mechanical.  I don’t think she even looked at the paintings, she just pointed the camera and shot, waiting just long enough to snap the pic and move to the next one, elbowing her way through the crowds.  All I found myself hoping was that she has an old grandmother who has always wanted to go to the Louvre, and promised to take pictures of everything and bring them home so she could see them.  Sadly, I’m pretty sure she will take them home and never look at them again, and missed the fact that there were awesome paintings and stuff to look at.  C’est la vie.  I made my way past most of the paintings, and on to the Egyptian artifacts and Decorative Arts, which I personally find more appealing.  I enjoy stuff that is historic and 3D. :) 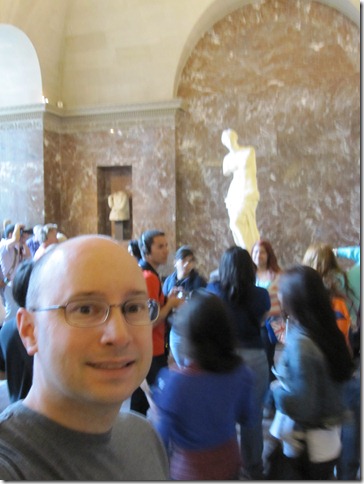 Then I stumbled onto this busted up statue people were all obsessing over again.  I don’t see the fascination, there were plenty of un-broken ones just behind me in the gallery.  But not wanting to feel left out, I took a picture with it anyway.

Enough of that, next I made my way across the Seine and attempted to go over to the Musee d’Orsay.  I was mostly curious why they needed a museum devoted to Pig Latin, but the line was ridiculously long there too, and it had started to rain, so I moved on and hopped the Metro over to the Eiffel Tower. 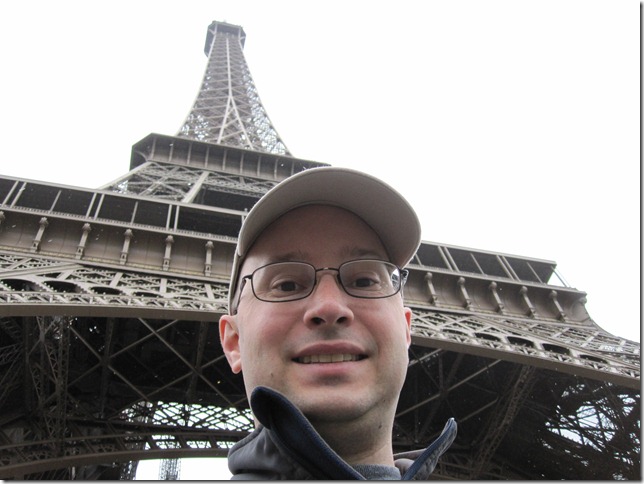 Yup, it’s still here.  On a background of white clouds under the rain.  Again, long lines and lack of desire to pay to go up and see stuff in the clouds that I already saw from the top of the Arc de Triomphe the day before in the sun, I took some pictures, and left.  Though I must admit, it is a pretty spectacular landmark up close.

From there I took a cruise down the Seine River, and saw the city that way.  In the rain, but the boat was enclosed so I could see it from the inside.  Not bad, but I didn’t really feel like I saw more than I do walking around.  It just allowed me to say I’m on a Boat.

Finally I ended up at the Cathedral of Notre Dame.  I looked for the hunchback, but he must have been sleeping.  So instead I just looked around inside, and took some pictures outside.  Honestly, I’ve seen some pretty spectacular cathedrals in my travels, and this really wasn’t one of them.  Sure it’s historic, but I’m not one for seeing things solely because they’re famous.  I got nothing out of this.  But I waited in line in the rain to go in, because it was free.  I will wait in long lines when things are free.  I would not wait in a long line to pay $10 to climb to the top of the tower.  I’ll leave that for another trip. 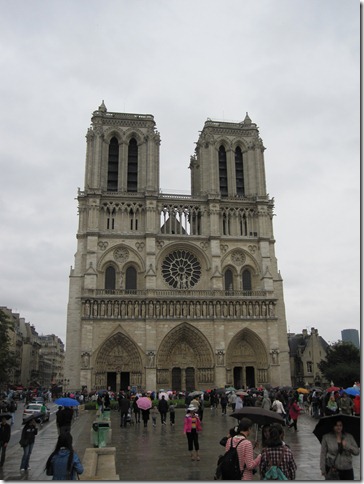 And that brings us once again to everyone’s favorite part of the show where I comment on things I find amusing that don’t fit anywhere else.

Observation #1:  The French language isn’t so bad
I was honestly terrified to travel to France for many years because of the stereotypes of the French people being very snooty if you don’t speak their language.  Honestly, I’ve probably heard more people speaking English on this trip than French, at least in the tourist parts.  There are people from all over the world, for many of whom neither English nor French are their primary language.  But if they don’t know these, they learn to speak English and that’s the common language of communication.  Sometimes not well, but enough to get the point across.  And I’ve yet to find a French person who didn’t know enough English to get by.  I can get by in stores with basic numbers from 1-10, bonjour, sil vous plait, and merci, without too much more needed.  Handing over Euros always earns a “merci!” without too much more to be said.

Observation #2: The French must get really confused at dinner in the US
The hardest thing I had to figure out about meals around here is that entrée means starter or appetizer.  Of course, we Americans somehow got the idea back home that the entrée is the main course.  I have no idea how that got all mixed up over the years, but it must confuse the French at least as much as it confuses we Americans traveling to France.

Observation #3: Things aren’t so expensive if you think about it
Blame the European financial crisis, if you will, but the US dollar is doing fantastic against both the Euro and the Pound these days.  About $1.25 USD = EUR, which I think is fantastic.  Though yes, things do seem to cost more, especially food, until I thought about it a bit more.  As an easy point of reference, a hamburger dinner here at a typical casual restaurant might be about 15 euros.  That seems like a lot, considering that same hamburger dinner would probably be $12 USD or so back home.  BUT, realize that the tax and tip are both included here.  Back home, I could expect to pay 10% tax and 15-20% tip on that $12 meal, putting it at somewhere around $15-16 USD after all is said and done. Still cheaper than Europe, but not as absurd overall.  Now, yes, their alcohol is insane compared to the US, but that’s another topic altogether.

But I also was thinking how hard it must be for Europeans traveling to the US and the major differences in how we tip for service.  Most Europeans don’t have any idea what is an appropriate tip, though at this point they do seem to understand that it’s customary to do so.  They are aghast at the thought of paying 20% over the bill just for good service.  But they probably don’t realize that there’s a reason the bill is so relatively cheap in the US compared to Europe, and that the people working aren’t getting paid as much.  European servers come out like a bandit however, because most Americans can’t imagine not leaving a decent tip (even if less than they would back home), and I worry that in those major tourist areas the servers start expecting it.  I bet those servers wouldn’t be so happy if they had to rely on those tips as a major part of their income like US servers do.  Interesting observations.  But also I notice that servers here in Europe on the whole are less attentive and less interested than most US servers, probably for that same reason.  It’s one area that I think the US has the better standard for the customer.

That’s enough observations for now.  Until Day 3’s adventures, coming up next!