For some reason I feel the need to turbo tourist through this and kill myself.  But now I’ve still got 3 full days after this, and I will be able to do a lot of different things that are a bit more relaxing, I think.  But today was turboing through London attacking many different areas.

The day started with a trip back to Trafalgar Square and the National Gallery.  Room after room filled with art from all the ages.  Nothing particularly memorable there, but then again, I’m no art historian, so that’s OK.  A brief stop next door at the National Portrait Gallery, which was more endless rooms of paintings of dead kings and queens.  Similarly yawn.

But then things got interesting as I made my way up to the British Museum.  First of all, pictures were allowed nearly everywhere.  This is good museum policy, folks.  People want to take pictures that they’re never going to look at again.  I mean, why not?  Every museum should allow pictures.  I do understand the no flash policy, as the camera flashes can sometimes damage things.  Fine.  I’m cool.  Just let me snap some shots of the more interesting things so I have something to put on my blog.  Capice?  good.

So the British Museum has a lot of old stuff.  Most notably probably is their Egyptian collection of mummies and stuff.  And of course, big rocks with writing on them. 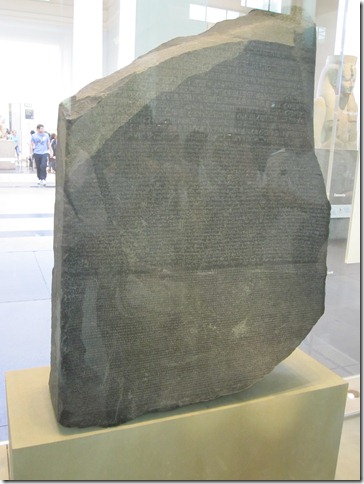 OK, OK.  So the Rosetta Stone is actually pretty cool.  By far the most interesting piece in the entire museum, but then again it was probably one of the single most important archaeological discoveries of the last 300 years.  Or something.  I’m not so good with numbers, that’s why I use a calculator.

After the British Museum, I hopped the tube up to King’s Cross and explored a bit of St. Pancras Station, right next door.  After being disappointed to find it was not insulin producing, I was thrilled to find the Olympic Rings greeting all of the EuroStar trains arriving from Paris. 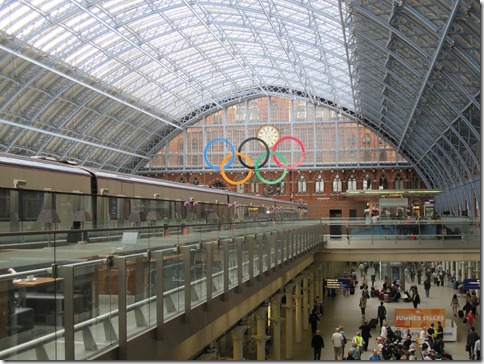 I’m pretty sure that’s there just to impress Jacques Rogge when he drops in to check on preparations for 2012.  But unlike most of the things London has done for the Olympics (the logo, the mascots, the logo, the mascots), this one is actually tasteful.  I approve.

Next door to St. Pancras is the British Library.  They have a gallery showcasing some of the more famous pieces in their collection, including things like the Magna Carta and quite a few illuminated manuscripts and such.  But I was particularly interested by their rare music collection.  It included such things as the original manuscript for Handel’s Messiah.  And this other rather famous piece that I’m pretty sure most everyone knows.  But I’ll leave it for you to figure out… name that tune! 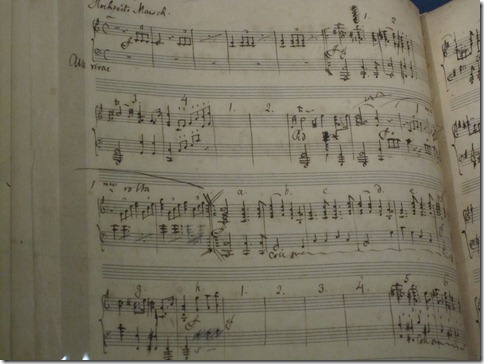 From the Library I went all the way across town to the Tate British museum, which had more unexciting art in it.  I walked through and moved on.  But a walk along the Thames was nice, and I found myself in Westminster right next to the Houses of Parliament.  Definitely one of the most ornate and interesting buildings in London. 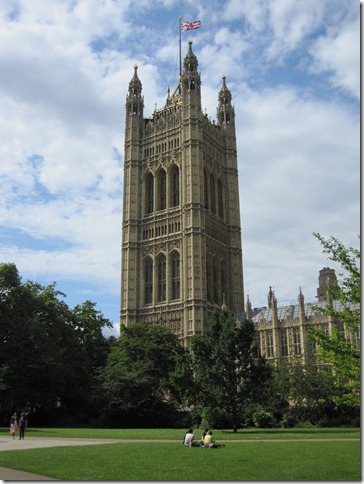 As I was walking by the visitor entrance, I was told that the House of Commons was in session, and since I obviously looked common enough, they invited me to the viewing gallery.  After going through airport-style security checks, I made my way into Westminster Hall, and upstairs to the gallery. 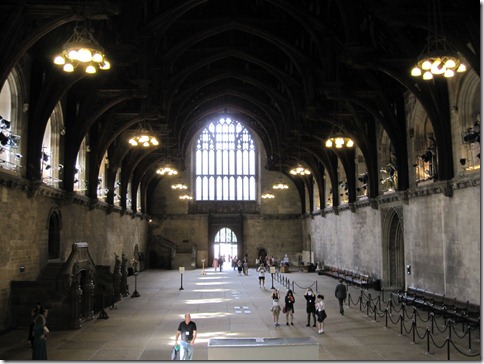 Though my camera was confiscated before entering the gallery, it was exactly like watching British C-SPAN.  They were simply giving floor speeches, which didn’t have a lot of interesting to say.  But there was some muttering, so I was satisfied I got my zero-point-zero-zero pounds worth. 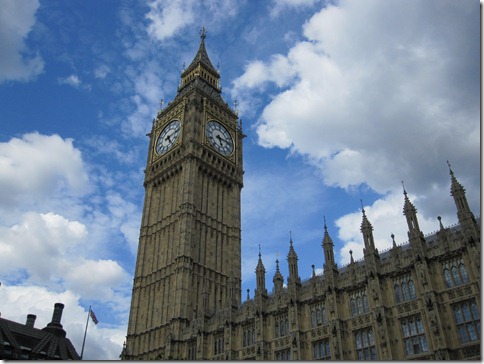 Big Ben greeted me outside, in all his splendor.  Before I made my way back up to Oxford Street, the busiest shopping street in Europe (at least that’s what Wikipedia says, so it must be true).  I only walked a short stretch of the west end of it, before I made my way back to the hotel.  On the way back I stopped at a pub and had some fish and chips, this time FAR better than the ones I had in Edinburgh.  Either luck, or just I was near a locale that caters more to tourists tastes.  I don’t know.  Either way though, there was tartar sauce, so I was satisfied. :)  After dinner though, as I got up to leave, I realized that my legs and feet were protesting.  They had basically locked up while I was sitting there.  I hobbled my way back down the street to the hotel and have had a nice relaxing night in the hotel room.  My feet and legs are happier now.  More adventures tomorrow.