Nothing much to report from yesterday, so there was no blog post.  Today was the last day in the office, as Friday is a holiday in Sweden… Midsommarafton or Midsummer Eve, is the day before the Midsummer Day (surprised?).  Apparently it’s supposed to fall on the actual solstice, but for practical reasons it now falls on the nearest Friday/Saturday.

After wrapping up things at work, I took the opportunity to head downtown (if that’s what you call it) to do some shopping.  I didn’t succeed doing much more than walking aimlessly for several kilometres around town, but it was a nice evening.  I stopped at Nordstan, the largest mall in Scandinavia.  It spans about 6 city blocks, mostly enclosed under a roof. 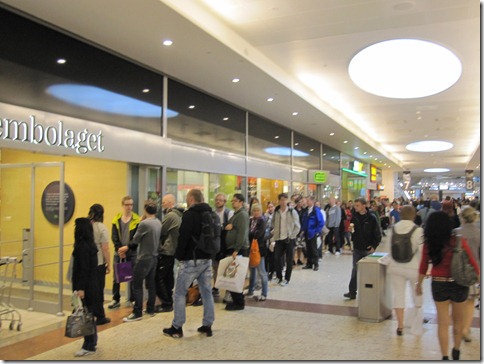 The most interesting thing I found was walking past the liquor store in the mall.  The line to get in the door stretched back a good 150 feet, which was rather amazing.  In Sweden, the only thing that can be bought in stores is stuff with less than 3% or so alcohol content.  So pretty much just the weak beers and that’s it.  All your good beer, wine, and liquor has to be bought at the liquor store… which isn’t open on holidays.  So everyone is waiting to get in to buy their liquor up for the long weekend. 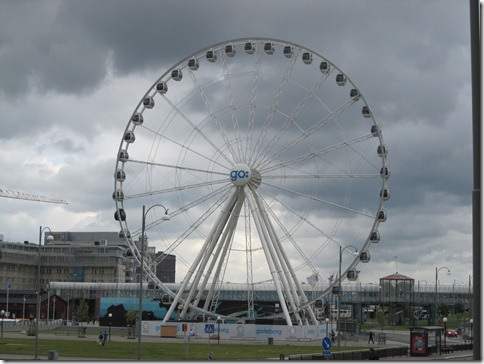 In other scenery, the Goteborgs Hjulet.  I can only assume that means “wheel” in Swedish, but I’m too lazy to look it up. 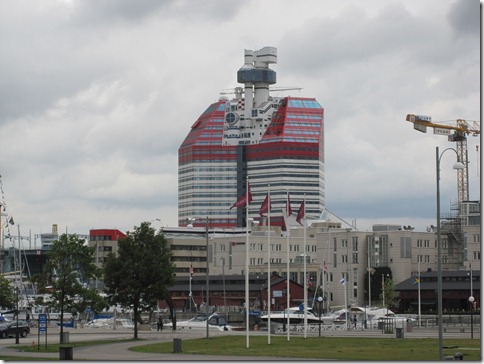 This is one of those odd landmarks that everyone knows about and just shrugs and go “oh well”.  They call it the Lipstick, for I guess obvious reasons.

Sleep is upon me.  Tomorrow plans are still up in the air a bit.  It’s expected that downtown will be a ghosttown due to the holiday.  We may go seek out some Midsommar festivities in traditional Swedish style.  Should have some interesting pictures from tomorrow’s festivities.  Saturday I head off to the rest of my adventures, starting with Edinburgh.  Where at least they speak my language… though some might argue that’s not the same. :)