Well, it’s the morning of day 2 and I’m still here… along with the rain who has decided to stop by for a visit.  But let’s first go back to last night…

One of the unexpected perks of the hotel I’m staying at is that in addition to free breakfast every morning, there was also a “light dinner buffet” each night.  Nothing light about it if you ask me.  This will become my free dinner each night. 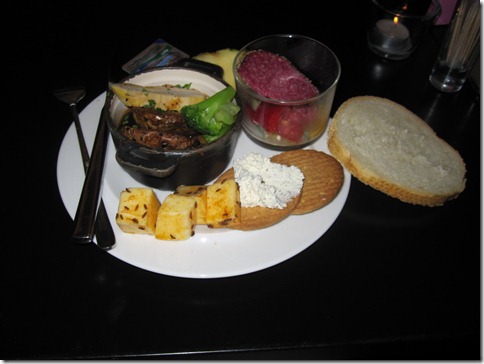 This was the first course, because I couldn’t fit anymore on my plate.  I went back for the salad and more cheese later. :)  But these Danes have their food figured out.  They like meat, potatoes, mystery cured meats, cheese, and bread and crackers.  What do you know?  I like meat, potatoes, mystery cured meats, cheese, bread and crackers!  Though they did seem to have their own individual flair that took some getting used to.  The meat consisted of an individual crock with some chicken and potatoes (and broccoli, meh), in an au-jus like gravy.  Delicious.  There was what I would call an antipasto-like cup with a slice of salami and some other vegetable matter in the bottom.  Adequate.  Then in addition to some bread, I had multiple types of cheese.  One of which was a yellow gouda-like cheese, cubed, and tossed with what appeared to be some sort of caraway or fennel seeds.  Slightly odd, but I liked it anyway.  Then some mystery herbed spreadable cheese, which went deliciously on crackers.  Nothing to argue about here.

But enough about the food.  After dinner I ventured back out and went to the Wonderful World of Hans Christian Anderson, loosely connected to the local branch of Ripley’s Believe It Or Not.  It was well-designed, but not too thrilling.  Then I went over to Tivoli Gardens to wander around for a bit. 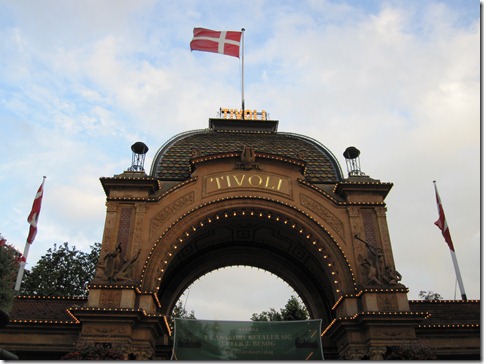 I didn’t go on any rides this time, just wandered around a bit.  It was definitely interesting to see.  I likened it to going to the fair though, but a little more permanent.  They had a fantastic big band on the bandstand playing tunes: 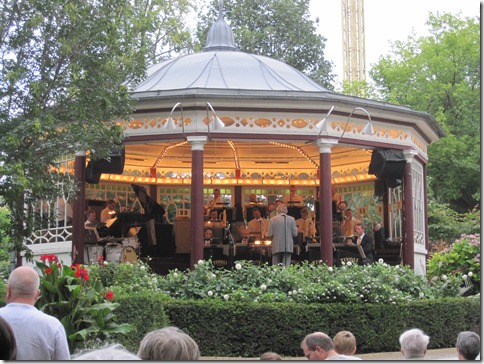 What I found most amusing though was that there had to have been a median age of around 70 in the audience. :)  Quite amusing.  But they were quite good, in a Glenn Miller style of music.

I made it back to the hotel and *tried* unsuccessfully to go to bed around 9 because I couldn’t keep my eyes open anymore.  Any number of things prevented me from actually getting any sleep, including:

That said, I finally did sleep, and sleep reasonably well.  As a result of my extreme tiredness, I had the expected half-awake delirious dreaming all night long, but that should be over now.

Day 2 began with breakfast, another huge spread of foods (including more cheese and salami and bread for breakfast… good thing being Italian I can manage to eat that any hour of any day of the week).  :)  The morning rains appear to have passed through, and the sun is breaking out to welcome the day.  Fortunately, like myself, nothing in Copenhagen opens before 10am, so I have no need to get up any earlier than I really feel like.  The clock tower just chimed 9:30am (which I have already tuned out if I don’t want to hear it, I thank years of growing up sleeping in a house with a chiming grandmother’s clock for that ability).

Today I’m headed out to a few more museums and a few more castles, and a walk down Stroget, the main shopping boulevard in Copenhagen.  Expect plenty of pictures and updates to come when the sun rises stateside.

For those who want the less-abbreviated view of my camera roll, check out my Picasa album of pictures here:

I can't sleep, and you are making me hungry with your provided breakfast and light dinner..