I’m taking this break from my usual vacation recaps to do what I do so love: rant about something I have zero control over.  Today’s rant:  Money.

Now, I have my issue with US money.  Yes it’s boring, yes it’s predictable, yes it all looks the same, but there are some good things going for that.

Swedish money annoys me.  Someone had the bright idea to make the bills larger in size as the denomination goes up.  This sounds useful in principle, but for goodness sake, a 500 kroner practically requires a folder to hold onto, let alone a wallet.  I understand that the different size money helps people to differentiate easily, that’s good.  All I ask is that you take one of the dimensions and make it constant.  Make them all the same width and vary the lengths, that’s fine.  At least I can fit them in my wallet comfortably without them hanging all over the place.

However, the Swedish 50 kronor note is by far the coolest looking piece of money I’ve ever run into: 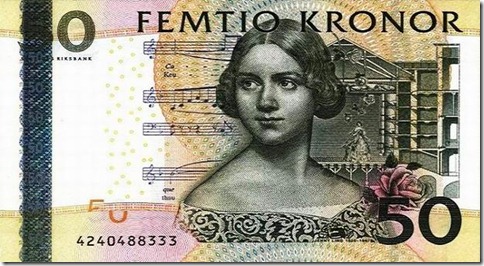 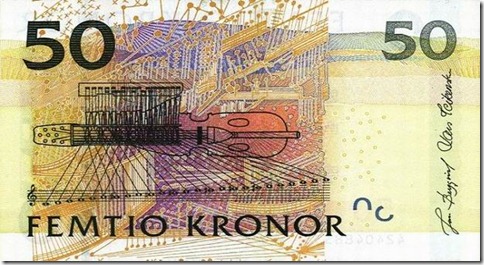 I love the music theme of the bill.  I’m sure there’s some greater significance to it, but I don’t care.  I just like it.

Then there are the 1 kronor coins, which get thrown around like US pennies (and are worth about a US dime), but are larger than a US quarter.  I don’t understand this.  The next larger denomination is the 5 kroner coin (which is maybe slightly smaller than a US half-dollar).  The problem is there’s nothing inbetween.  So as a result you get a whole lot of these “giant pennies” that just weigh down your pockets.  Not impressive.

Danish money has its own quirks, not to mention its own exchange rate.  One thing I found interesting is that the smallest banknote they use is the 50 kroner note, any 20, 10, 5, 2, and 1 kroner are in coins.  This means dealing with a lot of 20 kronor coins, and they’re like, real money.  It’s like having a $4 coin in US money, not something you want to just lose track of.  It actually feels a lot more like Canada where real money is in coins, rather than the US where anything in coins is pretty much useless. I know we Americans hate change (both the coins and the concept), and really don’t want to carry around pockets full of coins when we can have nice crusty disease-laden $1 bills to throw around.   But it seems to me like nobody has it right.

Not to mention, both Sweden and Denmark are E.U. countries, and neither subscribes to the Euro.  Having their own currency means that money changing is a big business around here.  You really find currency exchanges on nearly every street downtown.  (Which actually offer very competitive exchange rates, I found, at least exchanging among the Scandinavian currencies.)

Well, that concludes the money rant for now, until I’m sure I’ll have something to complain about Norwegian money too.  But that’ll have to wait.  Go back and read my real blogs about stuff that matters.  :)

Or continue to look at my constantly updated Picasa album.