An eventful day, which consisted of me walking all over Copenhagen, which felt like I walked forever, but in actuality according to rough calculation using Google Maps, was probably about 4 or 5 miles in total.  Probably at least .5 miles of which was running to find a dry place to get out of the rain.

I set out around 9:45am, where of course nothing opens until 10am.  The streets were relatively quiet… afterall, it IS a Sunday morning. 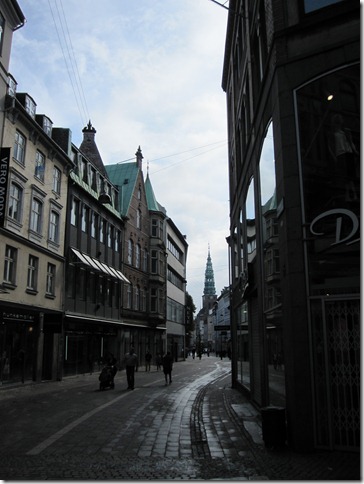 I continued down to my first destination, the Round Tower.  The Round Tower is the oldest functioning observatory in Europe, and originally housed the library of the University of Copenhagen, in addition to the observatory tower, but that’s long gone.  Now it’s just a tower. :) Round on the outside 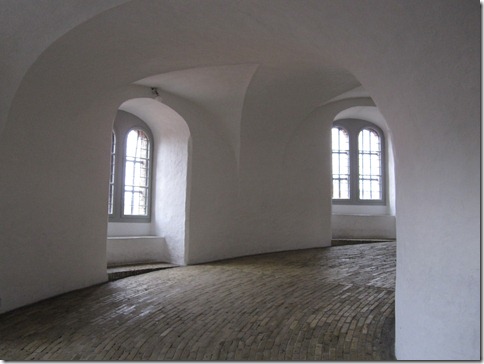 Round on the inside

Continuing up the continuous 7.5 revolution walk to the top, you reach the upper views of the old city, dotted with towers over the rooftops, somewhat reminiscent of Mary Poppins, but not in London. 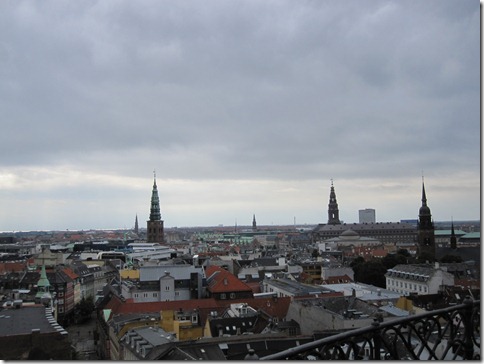 After the Round Tower, I went on to the National Gallery, which houses many of the national art treasures of Denmark (too bad I didn’t find anything treasurable).  Though I did admire the layout of some of their galleries, particularly the large one that had all walls after walls of painting crammed into it. 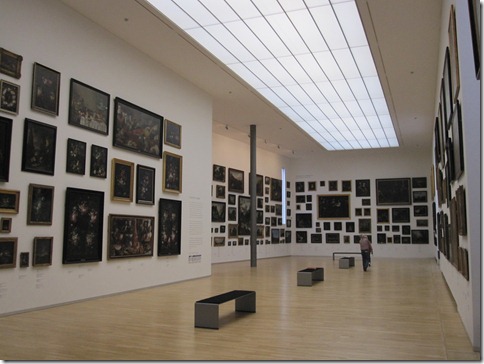 Yeah, and that wasn’t even the whole room.  It looks like a great puzzle game to line up as many straight lines as you can in the room, and make it look like you knew what you were doing.  I think the Amazing Race should go here and have a challenge to count all of the pictures in the room. :)

My visit here was unceremoniously cut short by an ear-piercing fire alarm which caused the entire building to be evacuated.  I decided I had enough anyway and started walking across the street to the King’s Gardens and the Rosenborg Castle.  Of course, as soon as I was exactly halfway between the two, the skies opened up and proceeded with a 30-minute light-to-heavy downpour.  It had rained earlier in the morning before I left, but the skies were clear when I left the hotel so I didn’t bring my raincoat.  Oops.  I’m from Seattle, I should know better than that.  In any event, after hiding under an inadequate tree, followed by a bus stop shelter, then diving through the rain to the stone archway at the entrance to the gardens, whereupon as I got closer to the castle, the rains would become more and more daunting.  I eventually was under a small entry archway probably 500m from the castle, with about several other groups of people avoiding the rain for about 15 more minutes until there was a slight let up.  Finally I made it over to the castle where I managed to dry off inside while viewing the royal palace and the ever popular Crown Jewels. 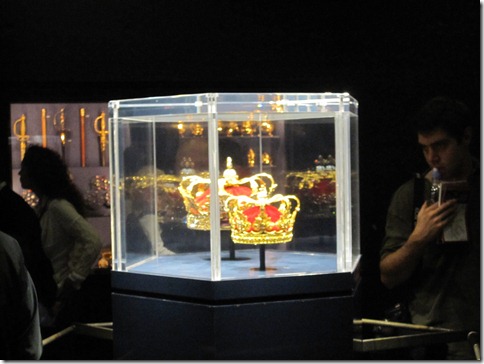 I didn’t pay the 20 kronor fee for permission to take pictures, so I just managed to avoid the security people and take simple pictures from dark corners of the room, while she had run over to harass someone else who was taking pictures. :)  It worked out, but now I think I’m a fugitive from the Danish government.

After making it over to yet another of the Queen’s royal palaces, I meandered my way back to the hotel, stopping for lunch at a sidewalk cafe serving Italian food.  It was tasty, but I wasn’t quite as hungry as I thought.  I tend to get that way while I’m on vacation, but have to force myself to eat or I will not feel zesty later on.

International Travel Observation #2 – Europe Edition:
Up is on, down is off.  Why is this so difficult for you and your freaky-deeky light switches to understand?  As far as I’m concerned, someone installed every switch in Europe upside down.
While I’m on the subject of Europe… what’s the deal with these baby strollers?  I swear, every parent pushes around their kid in this Sports-Utility Stroller that has the big wheels and looks like you could go 4-wheeling in it.  I’m sure there are people in the States that have these, but I must say they really stick out here.  In the States, I see people trying to go with the minimalist approach to strollers, just enough you can maneuver tight corners and get where you’re going easily, not such that you need to signal lane changes lest you cripple an old lady crossing the street.  But I digress…

It’s 8:30pm now, and I plan to head back out and over to Tivoli to see their nightly water light show and fireworks barrage at 10:30pm.  The firework mayhem at Tivoli appears to be a regular 10:30pm occurrence, so I have determined that trying to go to sleep before 10:30pm any night will be ill-advised anyway. :)  Tomorrow is the last day in Copenhagen before I venture across Sweden to Stockholm for 3 more nights.  I think I’ve sufficiently seen most of what I wanted to here already anyway.