This morning I woke up before the clock tower woke up.  Apparently (though I was too tired to notice it the first night), the clock tower only chimes between 8am and midnight.  When I was lying in bed this morning waiting patiently for the quarter chimes that didn’t come, I found this out.  So that’s why they didn’t wake me up all night long! :)

I just got back from a delicious breakfast of, well, food.  I’m sure I violated all laws of Danish cuisine in the ways that I combined the food to eat it, but what do I care? 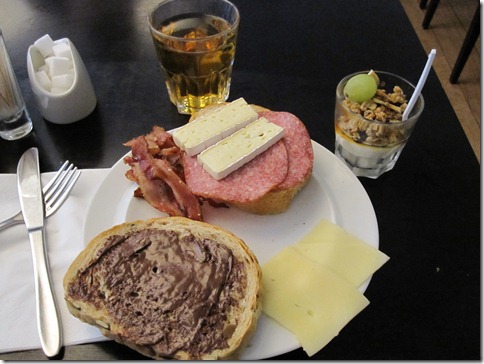 I reiterate, there’s is nothing wrong with meat and cheese for breakfast.  I would eat this at every meal.  For your analysis, that’s a heap of bacon, next to some white bread with salami and brie, some swiss-like cheese on the side, with a slice of rye bread slathered in Nutella (ok, that was an odd combo, but I was half asleep when I did it.)  A glass of organic apple juice (that tasted severely watered down, or just band) and a cup consisting of greek yogurt (or yoghurt, as they spell it) with maple syrup and some granola stuff on top.  I have enjoyed this both mornings so far, but it was a bit odd the first time.

And for the record, yes Mom, you look like a fool when you’re sitting down to eat and take a picture of your plate.  However, because I know you like to see pictures of food, this was included for you. :)

While I’m on the topic of food, the Danes really seem to like bacon.  And honestly, can you blame them?  Bacon is delicious.  Though they also like the heavily peppered kind (not for breakfast, just for everywhere else), which isn’t so bad either.  So for lunch, I took a shot at a bacon dog from a street hotdog stand (so ubiquitous throughout Copenhagen city squares). 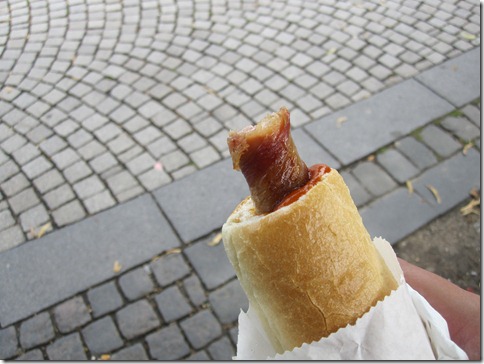 Yes, that’s a hotdog wrapped in bacon, and then inserted into an oddly designed form-fitting hotdog bun.  I’ve had multiple people inform me that “oh, you must eat a hotdog in Copenhagen”.  I came, I ate, I was underwhelmed.  I may give it another chance elsewhere in Scandinavia.  Maybe I need a plain-Jane dog.  Maybe that’s where the flavour’s at. :)

So once again, I set out too early for anything interesting to be happening in the city this morning.  Businesspeople walking down the streets to work, nothing too exciting other than that.  But I did make it over to Vor Frelsers Kirke, the church with the big spiraling staircase spire, and seemingly the only thing my mom remembers from when she was in Copenhagen 35 years ago and keeps asking me if I saw it yet.  YES, I saw it, and you’ll see about a dozen pictures of it in today’s Picasa album update. 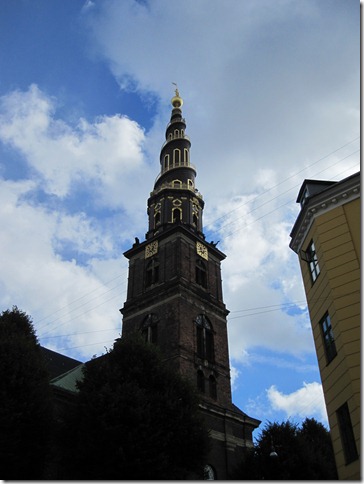 Of course, I made it there the first time at 9:30am, well before its 11am opening to climb to the top of the tower.  But through the miracle of blogging, I’ll skip forward to where I actually climbed it sometime around 1pm when I made it by there again.  It’s a long way to the top, up some very narrow staircases, and through crowds of people causing traffic jams midway up the spire which no doubt would never be acceptable in the overly-litigious and safety-conscious USA.  Thank goodness we’re in Denmark. 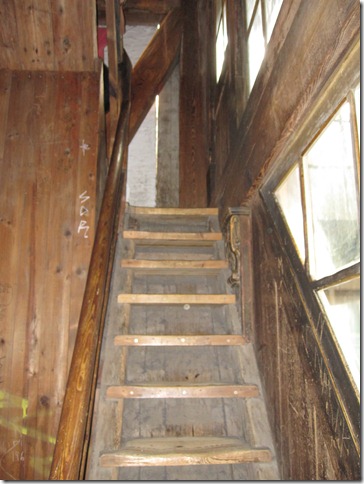 Climbing the tower reminded me a lot of going down to Olympia and climbing up the Washington State Capitol dome, back when it was safe and possible to do so.  Except that that was mostly solid steel staircases, and this was basically wood everywhere.  But sturdy wood, I think…

It should be noted that this is a real working bell tower, which we were made patently aware of when the 1pm chimes started tolling and reverberating throughout the entire tower.  Though it was cool to actually stand next to the bell and see it ringing.  Deafening, but cool. 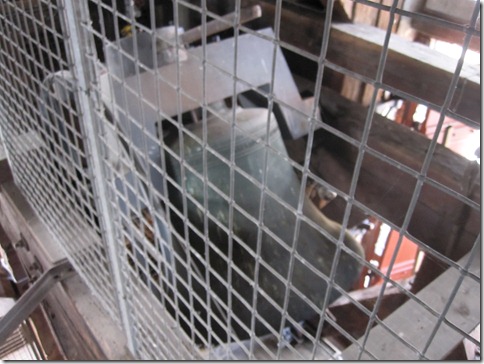 Once at the top of the spire, a fantastic view of the Christianhavn area of Copenhagen. 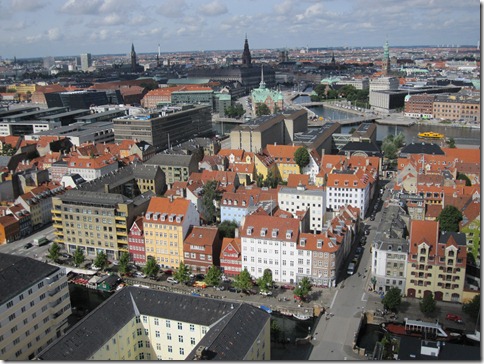 Moving on… I also took a canal cruise to see the sights.  It was actually very reminiscent of a canal cruise I took in Amsterdam many years ago.  But still interesting and a good way to see everything from the water side.  Also watching these long flat boats trying to navigate some very low, and very narrow canal bridges was entertaining. 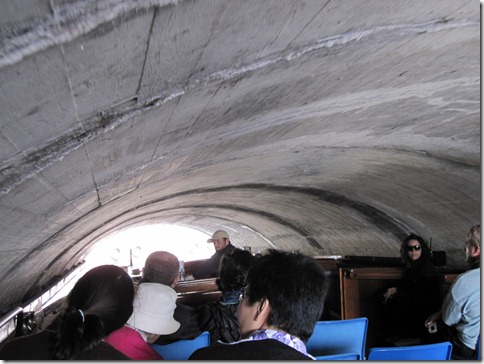 The trip also took us past the site of The Little Mermaid, Copenhagen’s treasured landmark. 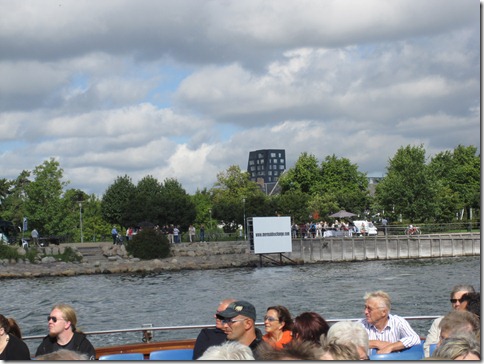 So treasured, in fact, that the Little Mermaid is on vacation, and has been replaced with a billboard.  She is currently on display in the Denmark pavilion at the 2010 World’s Fair in Shanghai.  As the billboard notes, there is a 24/7 live feed of the Little Mermaid where she sits in the Denmark expo online at www.mermaidexchange.com.  I guess I didn’t need to come here to see it.

Following some shopping adventures as I meandered my way back to the hotel, I did stop and pick up some creature comforts of home, namely a nice Diet Coke, or sorry, Coca-Cola Light.  My sister would have serious issues here, considering how much Diet Coke she lives on.  Last night at the exorbitant hotel markup a 0.25L bottle of Coke was available for the low, low price of 25 DKK, or roughly $4.25.  I saved myself some money and picked up a 0.5L bottle at 7-Eleven for about $3.50.  I guess it’s strength in volume in America.  I can’t imagine there really is enough shipping cost involved to increase the cost of Coke that much over here, so it must just be the novelty factor.

Nothing much more on my intended calendar for the day.  I think I may just take it easy tonight and maybe venture out again later to wander around a bit more.  Tomorrow we’re off to take the high-speed train on a 5.5 hour trip to Stockholm.  Looking forward to some exciting changes of scenery along the way, in order to arrive at another city built around the water.  But 3 nights in Stockholm to explore another new town.  That’s the excitement.  And now I shall rest.