I really use the museums as a convenient excuse to drag myself to different parts of the city.  It works out pretty well, but after a certain point you just get sick of them all.  Today I finally reached the “museum fatigue” point, probably because there wasn’t anything historical about most of them themselves, they were just buildings with historic stuff in them.  Or something.  But, for my last day in Stockholm it went something like this:

I started out heading over to the Ostermalm neighborhood, and went to the blandly named History Museum.  Even though its name was rather uninspired, the museum itself was probably one of the more interesting and well-designed museums I’ve been to yet.  Really, this museum is dedicated to the history of the Swedes, from before they were Swedes to where we know them today.  The museum itself was just interesting.  I give lots of credit to the airport-terminal inspired gallery, that I just thought was a creative design idea: 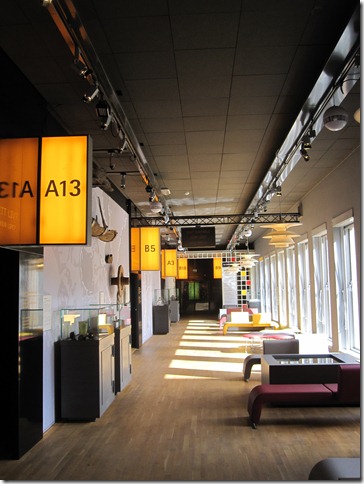 Following the History Museum, rather than taking the bus down to the next museum area, I decided to walk the kilometer or so down the road.  It was quite nice (until it started pouring down rain).  But along the way I seem to have run into Embassy Row.  Without looking too hard I ran into the Hungarian, Turkish, and Korean embassies.  Though according to Google Maps, I walked right past the US Embassy without realizing it. 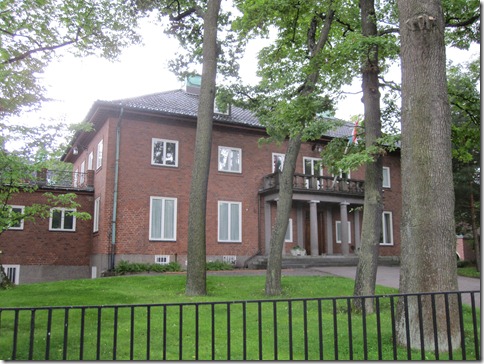 Fortunately for the pouring rain, this time I brought my rain jacket with me, and all was fine.  I checked out the Maritime Museum, which was decidedly yawn.  Then I went next door to the Sports Museum, which was also pretty yawn, but they did have a curling stone, so I guess they aren’t all that bad. 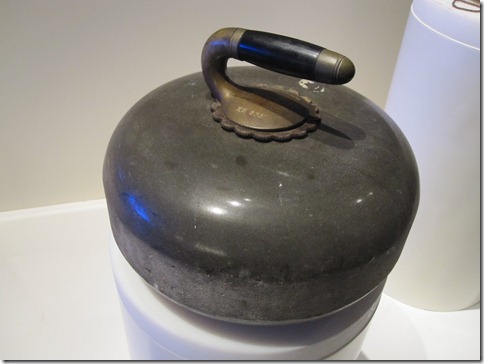 Moving on to the Police Museum, this one was relatively newly constructed, and pretty poorly maintained.  And boring.  Though I suppose it was interesting looking at their CSI field kit display: 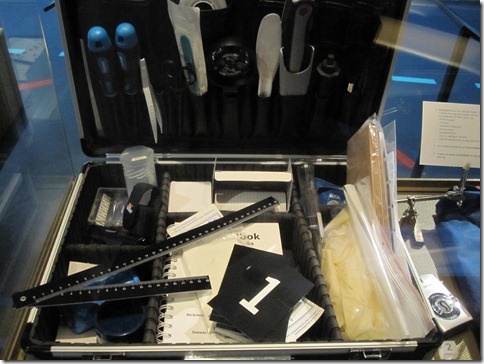 What is a field kit without useful numbers to put everywhere.  I don’t see any chalk though… how are you supposed to outline the dead body!?  Obviously an incomplete kit. :)

Finally made it on to the one museum today I was really looking forward to the Technological Museum.  This was pretty much like going to the science center, but also had some more interesting museum-like exhibits as well.  The museum is in what looks like it once was a top-secret national laboratory, or at least some non-descript industrial building that you really don’t know what goes on inside. 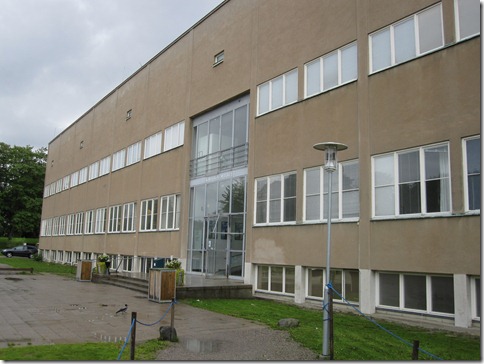 It was at this point museum fatigue started setting in, and after an hour and a half, I just had to leave.  I still saw plenty while I was there and it was certainly an interesting museum.

I thought I was done with museums for the day, until I wandered past the Musikmuseet.  And of course, I couldn’t pass that up.  I’m glad I stopped, because it was a fun place to just play instruments and make noise.  Though it would have been nicer if I were there by myself, because all of the other people making noise on the instruments were driving me bonkers.  My music friends can relate, when there’s just people banging on instruments and making noise, rather than at least trying to do something melodic.  It’s like having a room full of 30 kids with recorders all noodling at once.  Kill me now.  But I digress.

In an interesting coincidence compared to last night’s blog post, one exhibit offered me an answer to a question I didn’t bother to look up… WHO is that lady on the 50 kronor bill? 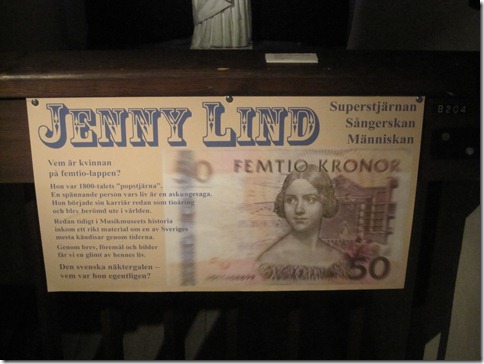 Well now I know.  It’s Jenny Lind, The Swedish Nightingale.  A famous opera singer.  Though my favorite comment in the exhibit was something to the effect of, “What did she sound like?  We don’t know, because no recordings persist.”  But she must have been fantastic anyway. :)  Though I just keep flashing back to the movie Singing in the Rain.  Nevermind.

Among their many exhibits, including the obligatory tribute to Sweden’s own ABBA, was an entire floor with a salute to drums.  Seriously?  Are drums really that important that they need their own exhibit?  Every drummer I’ve known has been… nevermind.

So the drums exhibit did include something I had a ton of fun with. It was a dynamic sculpture called the Rytmobil.  Basically it was this strange collection of noise-making stuff, that was played by a computer, and you could program your own drum beat track to control the 5 elements. 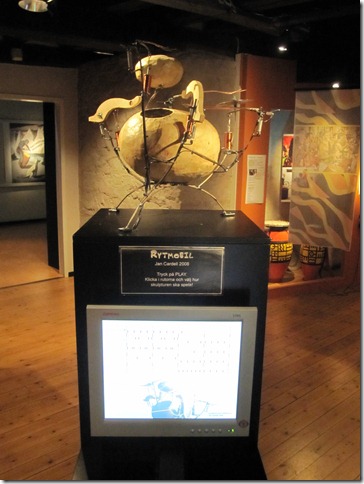 My beat was pretty rockin, given what I had to work with. 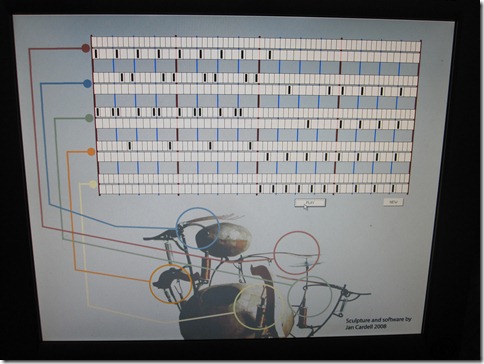 That concluded the first bulk of the day, but a trip to Stockholm would not be complete without a stop at the World’s Largest IKEA store! 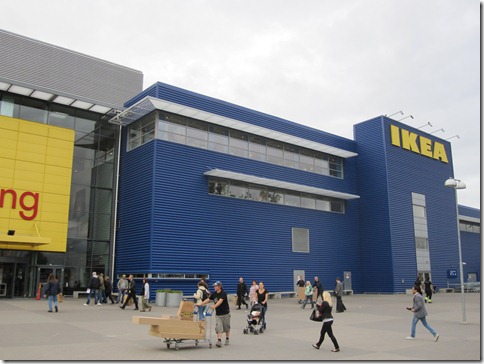 Yes, it was big, 4 floors of Scandinavian-designed junk.  However, I can hear your question now, if it’s 4 floors, how can IKEA control you in one single loop around the store like they’re known for?  Easy, the main store is round.  You start at the top, and you wind your way down, round and round until you reach the bottom and check out.  Other than that, it’s like every other IKEA I’ve ever been to.  Except for the restaurant.

So the top floor has the big IKEA restaurant, where I couldn’t resist enjoying some dinner. 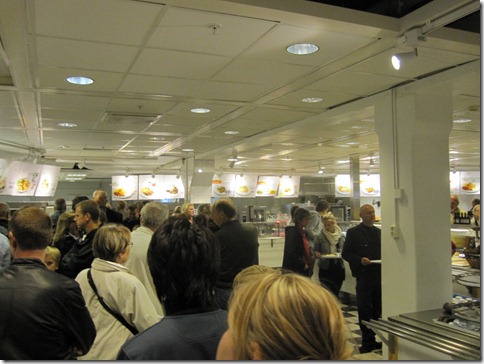 The place was packed, crazy full of people.  But who can resist the quality cafeteria-style food at ridiculously low prices?!  For my diner I decided to break with the easy mold of meatballs and mashed potatoes and instead go with the more delicious sounding sausage, potatoes au gratin-ish, and pickled beets.  I splurged and also got a salad and chocolate mousse for dessert, with a lingonberry soda to drink.  All that for the ridiculously low price of 40 kroner, or about $5 US.  And it was yummy. 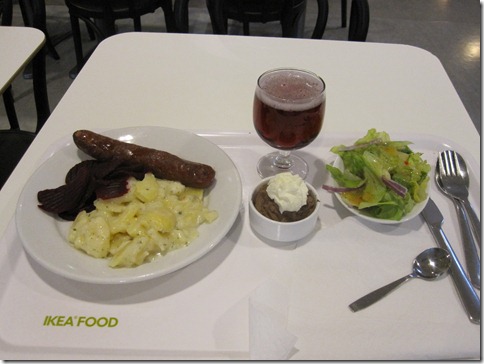 As I then circled my way to the bottom of the store, I found on the second floor the 5 kroner cafe!  Everything 5 kroner! 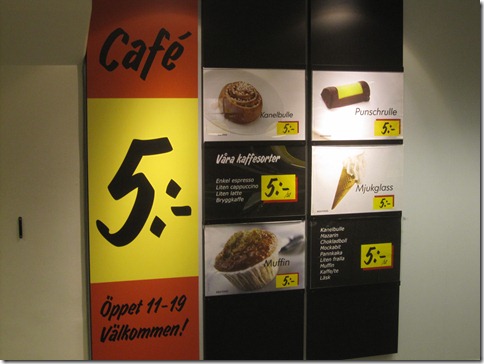 5 kroner is essentially zero dollars.  OK, it’s actually about 65 cents US.  Still pretty good deal for your snackage.  Hey, it’s a big store, you’ll probably get hungry every floor or so.  Finally I made it to the bottom, where I found… ANOTHER cafe.  Geez.  I plowed through the warehouse of IKEA goods, and to the checkout, to find of course the snack bar.  (What if you get hungry before you make it to the car?)  All in all, it was interesting, but it was IKEA.  I would go again just for the food though.

Well, that was a long day and a long blog.  If you made it this far, kudos.  Time for me to get ready to go to bed, before I have a 6-hour train ride in the morning to Oslo, where we will continue my final 2 days of “vacation” before heading down to “work” in Gothenburg.  As always, plenty more pics on the Picasa album.  See you in Oslo.