What a day it has been.  I’ve ventured all over Stockholm exploring, well, mainly museum after museum.  They call themselves “the city of museums” and I really can’t disagree.  You can’t go 50 meters in this city without running into one.

I started out early, and found the one museum that opens earlier than all the rest, probably because it’s one of the most popular, the Vasa Museum.  Built to house the nearly-completely salvaged remains of a 17th century built ship, that was too top-heavy and sunk on its very first voyage not to be raised for 300 years. 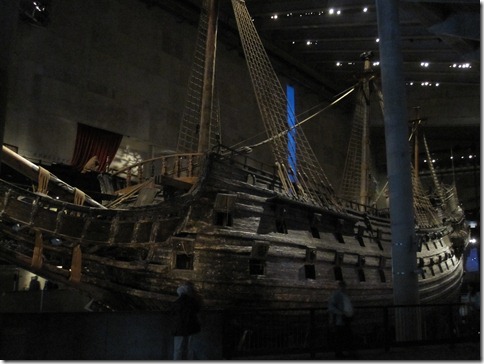 Everyone says this is the “must see” museum of all of Stockholm, and I’d have to agree it is quite impressive, as confirmed by the literally dozen tour buses parked out front and swarms of people coming in to view it, led by their tour guides with their silly little stick “follow me” signs.

Moving on, I went next door to the Nordiska Museet, that really is a museum of Swedish cultural history.  Many displays showed Swedish life through the past several centuries, and how people live and work and do whatever it is that they do.  Interesting, yet I’d have to admit I didn’t spend a whole lot of time reading the displays, probably because they were mostly in Swedish.  :)  Though the architecture of these giant old buildings is pretty cool, and the central hall of the Nordic Museum was worth taking a picture of: 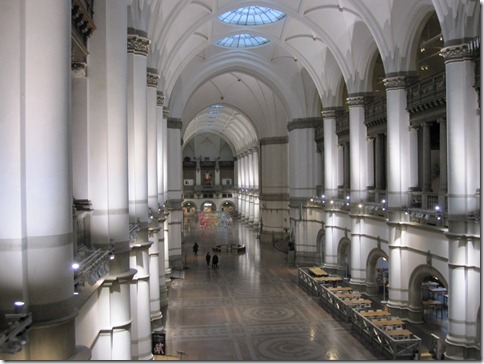 It was at this point in the day that it started raining, something that it would continue to do throughout the rest of the day.  Having dressed as I did in Copenhagen and realized that wasn’t going to suffice for the colder, wetter climate of Stockholm, I took a detour back to the hotel to reequip myself.  Pulled out the raincoat, put on the goretex shoes, but still left the shorts on… I am a Seattlite after all.

I hopped the T-Bane down to Gamla Stan, the Old Town of Stockholm.  Just stepping off the subway you realize you’re in a very different part of town from the main downtown core in Norrmalm. 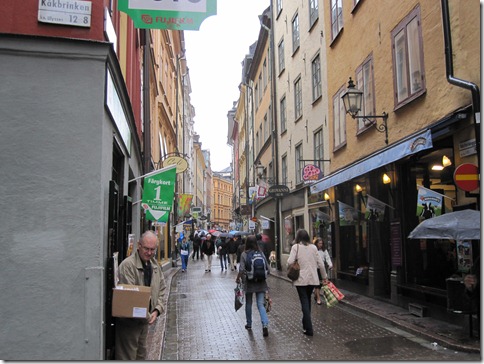 Narrow little streets, mainly pedestrian traffic everywhere… I finally found the “charm” in Stockholm, I just had to know where to look!  This is what you would expect when you think of a European city.  After wandering a bit through the streets, I came to the Royal Palace, home of the King.  I happened upon the changing of the guard, which honestly seemed rather disorganized and non-ceremonial, but I’ll chalk that up to my own vantage point. 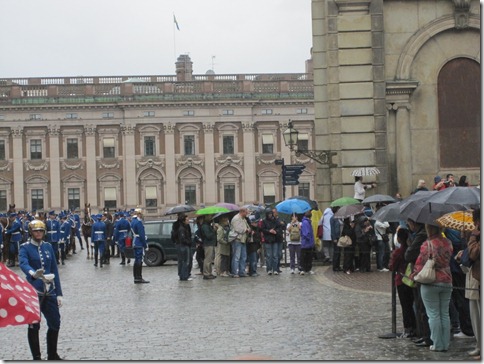 It was at this point, in the rain, after being smacked around by countless umbrellas by people who don’t know how to use them properly, that I decided to turn around and go back to the other side of the palace.  I went to Gustav III’s Museum of Antiquities, which really was two halls of statues and busts, and not much else.  Then I came to the Tre Kronor Museum, down under the palace, which contained a bit of the historical artifacts that weren’t destroyed when the original palace (the Tre Kronor) burned to the ground who knows how long ago.  Then I went upstairs and viewed the Royal Apartments, which was quite interesting.  Many of the rooms are used for special ceremonies and royal events, but when they aren’t they’re all open to the public (for a small fee) to view.  It was interesting.  Finally I made my way over to the Treasury, and went down into the vault to view a selection of crown regalia, which was quite unique.  I enjoyed that most all recent monarch’s crowns are Swedish-flag blue, which makes them look rather, cheesy, but Swedish. :)  I actually thought they were neat.  Unfortunately, unlike the Danish Treasury, pictures aren’t allowed in the Swedish one, so you’ll have to just imagine what they look like.

Conveniently located next door to the palace is the NobelMuseum, celebrating the history of Alfred Nobel, and the Nobel Prizes. 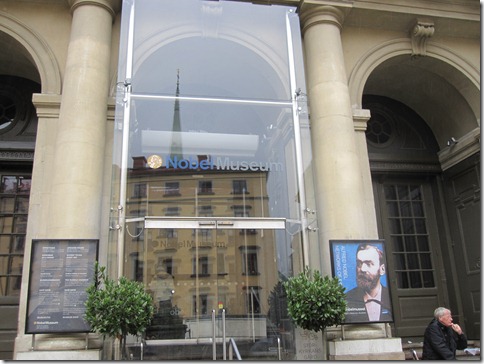 I found this to be a very technologically-savvy museum, with lots of interesting displays they have put together in very contemporary ways, using the latest technology.  It’s not a large museum, but definitely was interesting enough for a walk through.  Unfortunately, no dynamite was available in the gift shop as a souvenir.  Pity.

Finally succumbing to hunger, I stopped by a small pizzeria and must have been hungry because I hate a huge Neapolitan-style thin-crust pizza all by myself.  And it was delicious.  Certainly as good as most anything I would find back home… actually, comparable to Pagliacci, now that I think about it more.

After a quick jaunt to the Post Museum, where I learned all about the interesting history of the Swedish Post service, I headed back on the subway to the National Museum  (not to be confused with any of the other museums that may seem national, this one’s the real National museum.)

The museum is apparently in the process of restoration after 143 years of change.  Trying to let natural light back in after years of windows being closed off, and walls being put up, one of their galleries of busts is quite the view: 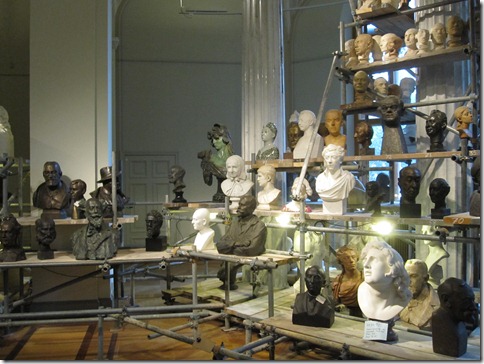 As far as I’m concerned, this is brilliant.  Spare me the busts on a pedestal scattered about, just put them all out and let me look through them like they’re on the clearance rack at Walmart.  At least I know what’s there and it’s all in once place.

And thus the museum closed at 5pm, as with most all museums in the city, so I braved the 5pm rush-hour commute back to the hotel on the subway.  Crazy yet efficient.  After hating the confusing and difficult-to-navigate city when I first arrived, I now actually find it to be remarkably easy to get around once you figure out how everything works.  Or if you just aren’t afraid to get lost.  Now if it will just stop raining.

Tomorrow I’m off to Ostermalm, another different neighborhood, with more different and interesting things to see.  Perhaps some other things that I’m not quite used to yet.  One more day in Stockholm then another train and off to some adventures in Oslo for a couple of days.  Now it’s time to relax.