When you’re dead tired and go to sleep at 9pm, you wake up early.  It was all I could do to sleep until 6am.  It rained all night in Copenhagen, which actually was kinda nice.  It felt much more like home.  I ate breakfast around 7am, with what has become the usual breakfast fare for Denmark.  I’m interested to see how this will differ from my breakfast experiences in Sweden and Norway, if at all.  I’ve also determined that indeed my stomach does not enjoy eating breakfast in the morning, which is probably the result of never really eating when I get up in the morning back home.  But I eat here, because if I don’t eat I starve. :)

After getting to the train station a bit early, but only because the hotel was boring and I wanted to make sure I had enough time to make it to the station easily, I am now on Sweden’s finest, the X2000 high-speed train bound for Stockholm.  The first leg of the trip from Copenhagen over to Malmo in Sweden was interesting.  We crossed the Oresund Bridge, opened in 2000 to connect Denmark with Sweden.

Riding a train is a new adventure for someone who grew up on the west coast, where trains are a novelty for most people.  My most significant train traveling experience is on the Disneyland Railroad, and somehow this doesn’t equate.  But the train is very quiet and smooth moving for the most part.  Quite enjoyable so far.  Though on the first leg to Malmo I was traveling in the forward direction, at Malmo we switched and I’m now watching everything go by right-to-left, like a Japanese magazine.  As expected, the purported “internet connection” on the train is spotty at best, and generally doesn’t seem to work at all.

What can I say about Copenhagen?  It was a lovely city.  Definitely a very pedestrian-friendly city, with bikes taking up the space where the people aren’t (and often where the people ARE too).  I did find the Danes to be very friendly, yet reserved, which I can relate to easily considering I find Seattlites the exact same way.  Speaking English was never a problem, and the Danes would try to use clues to determine whether or not you spoke English and just switch to it without asking.  I only had one instance where I really didn’t say anything and I was asked if I speak Danish or not.  It was almost as if they didn’t want to offend me by speaking Danish to me if I spoke English.  Very polite they are.

The city itself I found to be very safe.  Sure there were lots of dark streets at night, but never once did I feel like I was in a place I shouldn’t be, or that I should be on guard.  It took me several days to notice the distinct lack of panhandlers, for whatever reason.  Rarely do I find a big city in North America where I’m walking down a street in the downtown core and somebody isn’t rattling their cup asking for money.  Or the Canadians, who I’ve determined are the masters of the panhandlers con game, where instead of just asking for money they give you some sob story about how they don’t have money for the bus or whatever.  I swear I hear some of the most creative con stories when I am up in Vancouver.  But enough about our problems, back to Copenhagen.  Lovely place, plenty to see, go visit it when you have the chance.

The internet on the train was so lousy I never was able to post the first half, so I’ll just continue it here.

Ah Stockholm, you’re everything Copenhagen isn’t.  What a stark difference in cities.  I’ve determined that Stockholm is the New York City of Scandinavia, but without the charm.  Perhaps that’s a bit too harsh, but when I first got off the train, I really did not like this city.  First of all, it has to be one of the most confusing, impossible to navigate cities I’ve ever been to.  In addition to streets that rarely go straight for longer than 2 blocks, they change name every block, and if you’re lucky enough to find a street sign on the side of a building you might have some clue as to which way you’re going.  Compound that with a crazy ton of people crowding the streets, and you’ve got a not-very-tourist-friendly city.

But I managed to find my way around, get what I needed to, and make my way to the hotel.  Stockholm presented the most difficult of any of my hotels to book, because it was just difficult to find a reasonable hotel at a reasonable price.  As a result, I’m kinda out of the way, but it’s not too bad.  The room is… quaint. 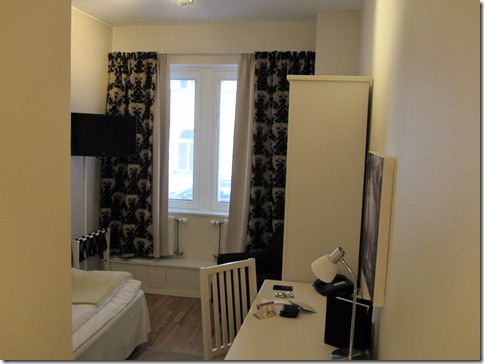 After settling into the room, I decided to wander out around the city for a bit.  Truth be told, if you don’t try to look at a map and figure out where you are, the city is reasonably navigable.  The Stockholm subway or T-Bane as they call it, is remarkably efficient and can get you somewhat close to most places you want to go.  Also, some of the stations are really cool, especially the one I found tonight at Kungstradgarden Station.  Down one of the longest escalators I’ve ever been on (seriously took about a minute to get from the top to the bottom): 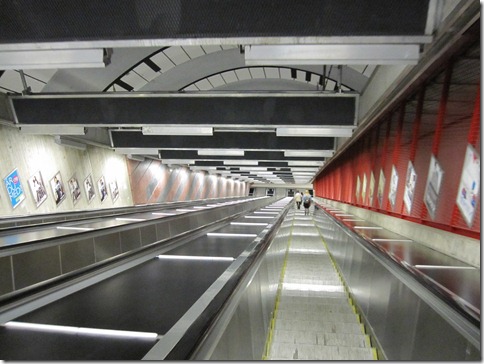 Into this cavernous subway platform that looks like it was blasted out of solid rock.  I think it was designed to look this way, rather than actually being that way.  But it’s still remarkably cool. 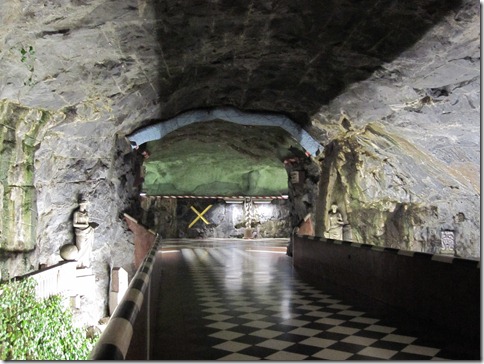 For dinner tonight, I decided to take a break from my constant attempts to “sample the local cuisine”, because I've noticed that as a result of my “sampling” over the past several days, I’ve managed to starve myself.  SO, I went to TGI Fridays and ate a big tasty hamburger and fries.  And it was guuuuuuud.  And now I think I’m going to sleep better than I have all week.  Tomorrow it’s back to living it up Scandinavian style.  But tonight… is done.

Love the photos of the escalator and the cavernous platform!